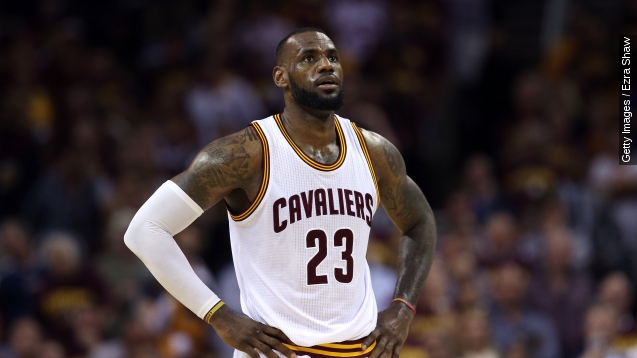 SMS
The NBA Is One Step Closer To Putting Ads On Every Jersey
By Carter Woodiel
By Carter Woodiel
October 29, 2015
A report says NBA All-Star Game jerseys will have a Kia Motors ad patch on them. It's the league's latest step toward making ads on uniforms the norm.
SHOW TRANSCRIPT

The NBA is reportedly going to place advertising on its All-Star Game uniforms, the latest step in the league's march toward regular uniform ads.

A report from The Wall Street Journal says the unis will feature a patch for Kia Motors, which has sponsored the All-Star Game since the 2010-2011 season. (Video via Kia Motors America)

If the NBA puts jersey ads on all uniforms, we have a pretty good idea of how they'll look.

Reports indicate the ads would be relatively small, just a 2.5-by-2.5-inch patch on the corner of the uniform.

Even so, those small patches could generate plenty of revenue for the league. NBA commissioner Adam Silver said in 2012 he hoped ads will bring in $100 million for the NBA, which generates around $5 billion per year. (Video via Bleacher Report)

Silver has been transparent about his desire to bring jersey ads to the league.

"What about advertising on jerseys?" radio host Dan Patrick said during a 2014 interview with Silver. "Is it viable? Inevitable?"

Silver likes to point out how the NBA has placed advertising on pretty much every other type of jersey the league governs, including the WNBA, the NBA Development League and even the unis for the Slam Dunk Contest.

Plus, advertising on jerseys is ubiquitous overseas.

So why aren't they here now? The truth is, a commitment to proper aesthetics isn't the only thing that's stalled the NBA's plans for jersey ads. If ads were instituted, everyone would want a piece of the pie, from teams, to TV broadcasters, to the league as a whole.

So if you're an NBA fan who doesn't like jersey ads, take the time to enjoy this season. Chances are the days of ad-free jerseys are numbered.