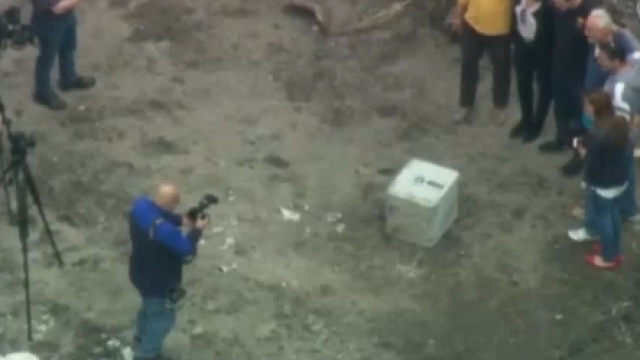 Pablo Escobar was killed more than 20 years ago, but the infamous drug trafficker continues to grab our attention. This time, it’s thanks to one of his hidden safes found in his former Miami Beach mansion. (Video via YouTube / VideosViralesx)

Escobar bought the pink oceanside villa in Miami back in 1980 and likely used it as a stash house for cocaine, cash or weapons. But in 1987, it was seized by the government and then sold in 1990. After a fire, it sat vacant for decades. (Video via BBC)

But new owner Christian de Berdouare bought the house in 2014 and began demolition, while keeping an eye out for anything the notorious Medellin cartel boss may have left behind.

Earlier this month, demolition crews found a safe, but it was stolen. Luckily for de Berdouare, Escobar’s men apparently hid another safe under the floor, and the owner isn’t taking any chances the second time around: "This is what we were looking for all along. To find something of this nature." (Video via WSVN)

In order to protect the safe and its contents, the find was taken to a secure location where it will be opened for a film crew making a documentary about the now-demolished house and its ties to Escobar. (Video via CBS)

But unlike Geraldo Rivera’s famously dull opening of Al Capone’s safe, "All I’d found was an old stop sign and a couple of empty gin bottles," there’s reason to be optimistic there could be something valuable in Escobar’s safe, according to the man who found it. (Video via WGN-TV)

"It felt like something was rolling inside of it," Miguel Mato said.

"What do you think if you had to guess?" a reporter asked.

"My guess is going to be gold or money or anything of value. That's what everyone wants to be inside," Mato said. (Video via WFOR)

For now, we’ll just have to wait for the owners to crack open the safe and show us what, if anything, the Medellin cartel left behind decades ago.

This video includes footage from VideosViralesx / CC BY 3.0.