The 'Most Likely' Change To The NFL's Extra Point 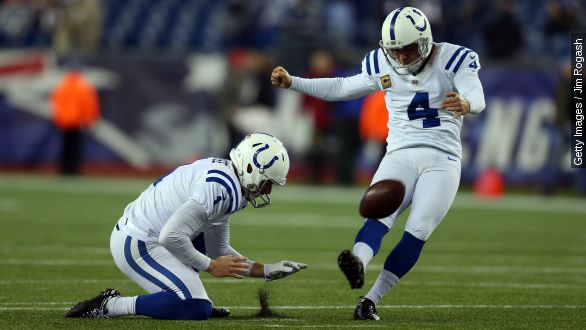 SMS
The 'Most Likely' Change To The NFL's Extra Point
By Matt Moreno
By Matt Moreno
March 30, 2015
Sports Illustrated reports the NFL would most likely increase the distance of the PAT, though there are plenty of other suggestions on the table.
SHOW TRANSCRIPT

It's no secret the NFL wants to change the nearly automatic PAT kick. It's just a matter of how to do it.

It's been discussed for years, but this year seems like the first time it might actually happen.

Since the NFL's competition committee started meeting this offseason, a change to the extra point has topped the list, with a wide variety of proposals from teams. Now, Sports Illustrated's Peter King says one proposal in particular is the most likely.

Additionally, teams defending the extra points could also score if they run back a turnover.

King says 30 of the 32 NFL teams want to change the PAT. It's just no one can agree on what that change should be.

Proposals must toe the fine line between being too gimmicky and using something that stays true to the game. (Video via YouTube / Dude Perfect)

And then there are ideas of eliminating kicking a PAT altogether. In an interview with NFL.com last year, commissioner Roger Goodell said he heard of one proposal where a touchdown earns an automatic seven points, but teams could get eight points for a successful run or pass play afterward.

Even nine point plays have been tossed around this year by the Indianapolis Colts, combining a touchdown, two-point conversion and a 50-yard field goal.

If the NFL adopts the 15-yard rule, PAT kicks would be about 32 yards long, which is certainly doable.

But it also certainly makes a difference.

The NFL experimented with the 15-yard line snap in the first two games of the preseason last year, which resulted in eight extra point kicks being missed. For comparison, kickers missed just five PATs in the entire regular season prior.

A decision about changing the extra point could come during the next owners meeting in May.