The Most Bizarre Apple Rumors Of 2014 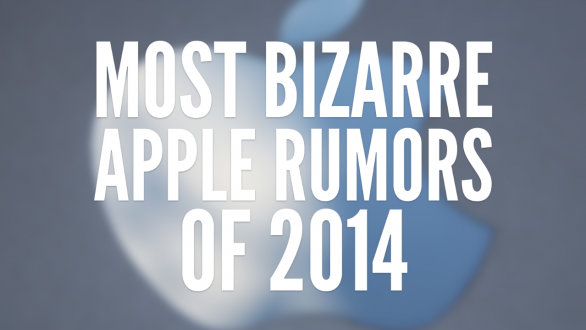 SMS
The Most Bizarre Apple Rumors Of 2014
By Mikah Sargent
By Mikah Sargent
December 23, 2014
Newsy takes a look back at some of the creative speculation and rumor-mongering surrounding Apple and its coveted devices.
SHOW TRANSCRIPT

Few companies inspire the level of speculation and rumor-mongering Apple does. While some of those rumors end up becoming reality, some are just, well, odd. Here's our look back at some of 2014's most bizarre Apple rumors.

To kick things off, we're talking Apple Watch, or — as it was once named — the iWatch. Remember that? (Video via Apple)

When Apple Watch rumors started circulating, there was no shortage of concept videos and prototype ideas. None quite hit the nail on the head, though. (Videos via YouTube / FinalCutKing, YouTube / ConceptsiPhone, YouTube / SCAVidsHD, YouTube / ADRStudioDesign)

And then there was the oft-quoted report from The Wall Street Journal about the Apple Watch packing in at least 10 sensors. Yeah, that didn't happen.

You know what else didn't happen? The rumored wrap-around, flexible displays. Creative thinking, though, folks!

Up next, iPhone! This year's iPhone inspired a lot of, um, interesting ideas.

There were rumors Apple would be ditching the headphone jack after the company acquired Beats.

We also heard Apple was working on an updated headphone design with built-in sensors for measuring heart rate and blood pressure; it ended up being a hoax. (Video via YouTube / FuchsPhone)

And we were supposed to see a reversible USB cord ship with the iPhone 6. It didn't happen. (Video via YouTube / Dom Esposito)

We'll round things out with a look at what's reportedly coming in 2015. One Taiwanese website claims Apple will ship a "glasses-free 3D" iPhone in the near future. Probably because glasses-free 3D is so incredibly popular. Hint: it's not. (Video via Nintendo)

There's also a rumor going around Apple will introduce a new 4-inch iPhone in 2015. Keep in mind the company introduced a 4.7-inch and 5.5-inch phone this year, and moved last year's models — the 4-inch iPhone 5s and 5c — to the bottom of its product line up.

It's highly unlikely Apple would design and manufacture a phone at a screen size it hasn't paid attention to for a year. Then again, who really knows what the company has in store? Here's to another year of rumors and speculation.