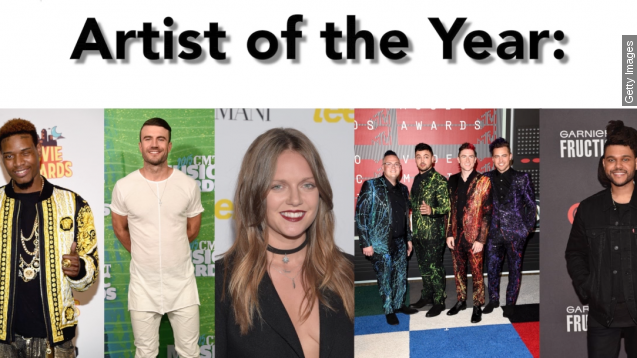 But the real news is the pretty big snubs and the odd groups of nominees we're seeing.

In the New Artist of the Year category, Fetty Wap, Sam Hunt, Tove Lo, Walk the Moon and The Weeknd are all nominated.

But where is Tori Kelly? The 22-year-old singer-songwriter has blown up after her incredible performance at the Billboard Music Awards in March. She also earned a standing ovation at the BET Awards and massive social media praise. She currently stars in a Pepsi commercial and will perform at the MTV Europe Music Awards later this month. (Video via Capitol Records / Tori Kelly)

It also seems odd to include Sam Hunt in the New Artist category. But then again, the music world doesn't seem to know how to categorize him. In some award shows, he's still considered a newcomer to the industry, despite releasing his "Between the Pines" mixtape in 2013. But in others, he's nominated in categories alongside country vets like Luke Bryan and Jason Aldean. (Video via UMG Recordings / Sam Hunt)

Hunt also snagged two other nominations — for Favorite Country Male Artist and Favorite  Country Album. Which again seems like an unusual decision to nominate him in categories with both new and old artists. (Video via UMG Recordings / Sam Hunt)

Ariana Grande, Taylor Swift and Meghan Trainor were nominated in the Favorite Female  Pop/Rock Artist category. Duh — Swift got nominated, but if Ariana and Meghan got nominated, what about the other women who had potentially bigger hits this year, like Demi Lovato and Jessie J?

Also, since when did anyone strictly consider Queen Bey a Soul/R&B artist? But that's the category she got nominated in. (Video via Columbia Records / Beyoncé)

The AMAs are fan-voted awards, so it will be interesting to see who ends up winning the categories Taylor Swift isn't nominated in. After all, Swift has 50 million followers on Instagram, so it's going to be hard competing against those numbers. (Video via Big Machine Records / Taylor Swift)

And fans can vote anywhere, including the traditional voting on the AMA website or by chiming in on Facebook and Twitter. The AMAs will air live Nov. 22 at 8 p.m. Eastern/7 p.m. Central time on ABC.