The MLB's Stadium Safety Plan Might Not Mean Taller Railings 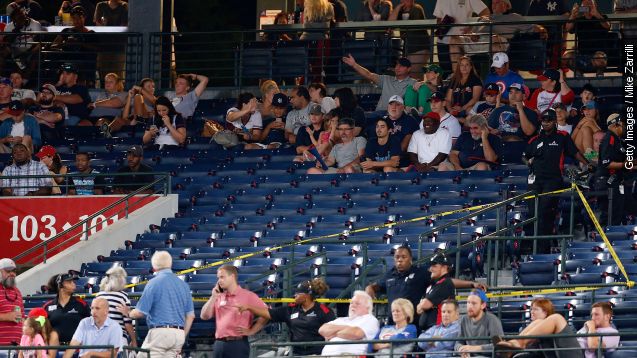 SMS
The MLB's Stadium Safety Plan Might Not Mean Taller Railings
By Matt Moreno
By Matt Moreno
August 31, 2015
After a Braves fan fell to his death Saturday at Turner Field in Atlanta, Georgia, many people are calling for the MLB to improve stadium safety.
SHOW TRANSCRIPT

The death of a Braves fan at an Atlanta ballpark over the weekend is putting more pressure on Major League Baseball to improve safety at its stadiums — safety improvements that are long overdue.

Season ticket holder Gregory Murrey fell to his death from the upper deck of Turner Field on Saturday. Witnesses say Murrey lost his footing while booing the Yankees' Alex Rodriguez. It's the second death in three years at the stadium.

"This is an old stadium, so perhaps with the new stadium, they can make the rails a bit higher," one fan told WAGA.

It's leading many fans to call for one of the biggest updates to stadium safety since the 1920s.

"Public entertainment in 1927 was a lot different than it is in 2015. Americans were short and smaller," Steven Adelman, a venue safety expert told NBC.

But fans falling over railings isn't the only concern. There's also a huge risk of bats and balls flying into the stands at major league speeds. Several fans have suffered head injuries from those this year.

"The instant I saw the ball, it hit me at exactly the same time, it felt, so there was no reaction time," Stephanie Wapenski told ABC.

St. Louis Cardinals manager Mike Matheny told USA Today: "It really scares me when I'll turn around and I'll see in these really close seats people that I know can't defend themselves — whether it be young kids or elderly people or people just not paying attention. ... I know I don't want my family getting anywhere close to those close seats without some sort of netting in front of them."

"There's nothing more frustrating to me when I go to scout players and I see families with young kids who are sitting very close to the field and beyond the netting. Part of me says, 'I would never bring my daughter and sit in that section,'" ESPN's Keith Law said.

MLB commissioner Rob Manfred has addressed the issue of fan safety in the past but has focused on netting instead of railings.

"We are examining all of the relevant information — stadium designs, where balls and bats go into the stands," Manfred told reporters.

Improvements to MLB fan safety appear to be on the horizon, but it's netting, not taller railings, that seems to be in the forefront right now. Murrey's death is still under investigation, but officials say they don't suspect foul play.