The Military Ban On Trans Troops Might Be Gone Soon 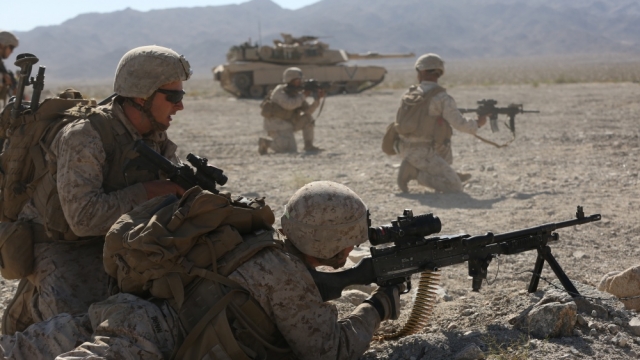 SMS
The Military Ban On Trans Troops Might Be Gone Soon
By Melissa Prax
By Melissa Prax
June 25, 2016
The Pentagon is expected to remove a ban on transgender people serving openly in the military.
SHOW TRANSCRIPT

Transgender people may soon be able to serve openly in the U.S. military.

Multiple reports citing unnamed officials say the Pentagon is walking back its previous ban on trans people in the armed forces. It's reported there will be an announcement in early July.

In 2011, many celebrated when the "don't ask, don't tell" policy was dropped, but the military did little about the "T" in LGBT.

Coming out as trans while serving could mean getting dismissed. Past medical guidelines banned openly transgender people from the service, and the military has been inconsistent in implementing new regulations.

Last year, U.S. Defense Secretary Ash Carter asked for study to see if there was any reason not to lift the ban against trans people serving — a move that drew a lot of criticism.

One of the most outspoken critics has been Rep. Mac Thornberry of Texas.

He's previously said his main concerns are about the cost of special housing and facilities for transgender service members and if the military would be responsible for providing transition-related medical treatment.

But the commissioned study said because there are so few transgender people in the military, allowing them to serve openly wouldn't cost much.

The study estimated only 2,450 transgender people are in the military. Other estimates put that number higher — between 12,000 and 15,000 people.

This video includes clips from U.S. Department of Defense, Rep. Mac Thornberry and the White House and an image from Getty Images. Music provided courtesy of APM Music.