The Media Returns To Ferguson And Reflects 1 Year Later 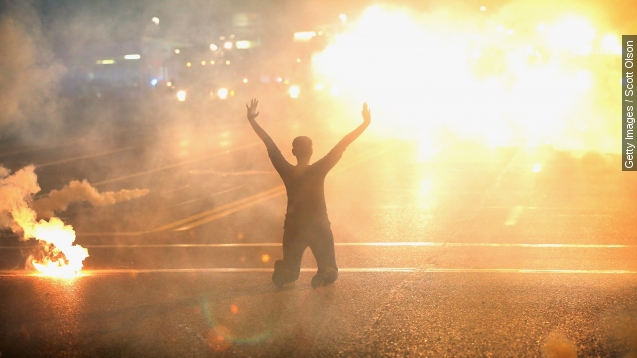 SMS
The Media Returns To Ferguson And Reflects 1 Year Later
By Kate Grumke
By Kate Grumke
August 8, 2015
Many will try to pinpoint why Michael Brown's death was the catalyst for the year-long social movement on the anniversary of Ferguson.
SHOW TRANSCRIPT

On August 9, 2014, Michael Brown was shot and killed in Ferguson, Missouri. His death led to nationwide protests, and heightened scrutiny of police use of force in minority communities.

And to mark the anniversary, national and international media outlets are predictably returning to the scene.

"This weekend Ferguson will mark the date with marches, protests and concerts," said MSNBC's Al Sharpton.

"It was right here that Mike Brown was shot after being confronted by police for shoplifting," said Al Jazeera's Kristen Saloomey.

"What really everyone agrees started a movement that spread across the United States," said CNN's Sara Sidner.

Seemingly every outlet is writing a think piece, hot take or look back on what has changed in the past year for both Ferguson and the country. These will serve as an attempt to nail down the shooting's place in history.

Outlets are pointing to local changes in Ferguson's government and community, and changes in the national discussion of police brutality and systems of inequality. (Videos via USA Today and U.S. Department of Justice)

In pointing to previous shootings that sparked protests, but perhaps didn't spur nationwide awareness of the issues, Slate asked, "What was different about the death of Michael Brown?"

That's a question many will try to answer as the nation continues to scrutinize police shootings of unarmed persons of color.