The McWhopper: A Food Abomination In The Name Of Peace 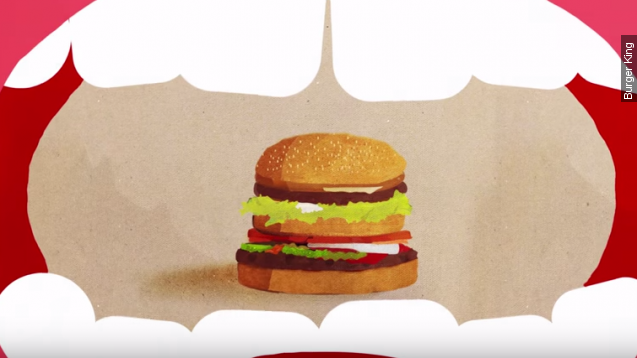 SMS
The McWhopper: A Food Abomination In The Name Of Peace
By Katie Link
By Katie Link
August 26, 2015
Burger King asked McDonald's to participate in a one-day collaboration to benefit Peace One Day. And thus, the McWhopper was born.
SHOW TRANSCRIPT

For one day, and one day only, there might be a new burger on the block. Meet the McWhopper. (Video via Burger King)

Burger King and McDonald's may be waiving the white flag for a day to join forces, recipes and share a hashtag to raise money for PeaceOneDay.

Peace One Day is a nonprofit organization created by the United Nations to raise awareness for the International Day of Peace. (Video via PeaceOneDay)

Burger King pitched the idea to McDonald's in a series of full-page ads in the Chicago Tribune and The New York Times. Oh, and they have a website, too.

The Miami-headquartered company wants its Chicago-headquartered rival to agree to meeting in the middle, to work together and sell a "limited-edition burger" Sept. 21, all in the name of peace.

McDonald's tweeted this in response. CEO Steve Easterbrook also shared his thoughts on Facebook. While he didn't give a simple "yes" or "no" to the proposal, he did say maybe "our two brands could do something bigger to make a difference."

He followed that up with, "Let's acknowledge that between us there is simply a friendly business competition and certainly not the unequaled circumstances of the real pain and suffering of war."

So maybe not exactly what Burger King had in mind, but McDonald's has promised to get in touch.