The Many Benefits Of Space Gardening 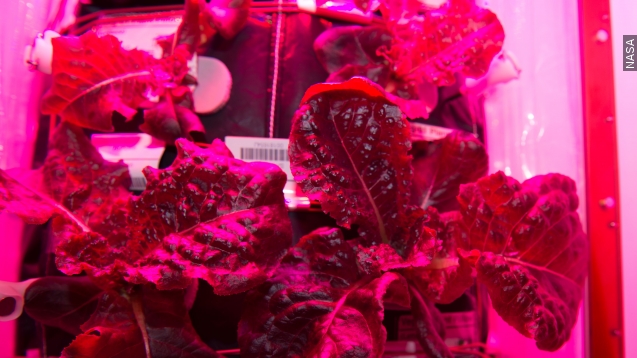 SMS
The Many Benefits Of Space Gardening
By Evan Thomas
By Evan Thomas
August 8, 2015
Astronauts aboard the ISS are set to taste-test the first lettuce grown in microgravity, as part of an experiment with long-term space agriculture.
SHOW TRANSCRIPT

Astronauts are set to sample fresh vegetables grown in microgravity on the International Space Station for the first time.

Their lettuce crops are ready for harvesting. They’ll eat half and freeze the other half for study back on earth. And yes, it’s red.

NASA has found red and blue LEDs are the most power-efficient lights and give plants all the wavelengths they need to grow.

NASA says “Green LEDS were added so the plants look like edible food rather than weird purple plants,” which seems like a bit of a missed opportunity. Who wouldn’t eat Purple Space Lettuce?

The prototype plant-growth system arrived aboard SpaceX’s CRS-3 mission in 2014. That launch carried spare parts for the ISS, HD cameras, communications lasers — and lettuce and Zinnias. (Video via NASA)

Since then, astronauts have been gardening. NASA hopes Veggie or a system like it could one day provide sustainable food supplies for long-duration missions. (Video via NASA)

Plants could also serve as more than just a food source. They absorb carbon dioxide during photosynthesis, which could decrease strain on atmosphere scrubbers.

Their antioxidant content could counteract some negative effects of radiation exposure from the Sun. (Video via NASA)

And it’s a nice hobby for astronauts sealed in a tube on the way to Mars for months at a time. (Video via NASA)

“The farther and longer humans go away from Earth, the greater the need to be able to grow plants for food, atmosphere recycling and psychological benefits.”

Just ask Wall-E about how important that plant he found was. (Video via Walt Disney Studios Motion Pictures)

This video includes images from NASA and music by Birocratic / CC by 3.0. Music.