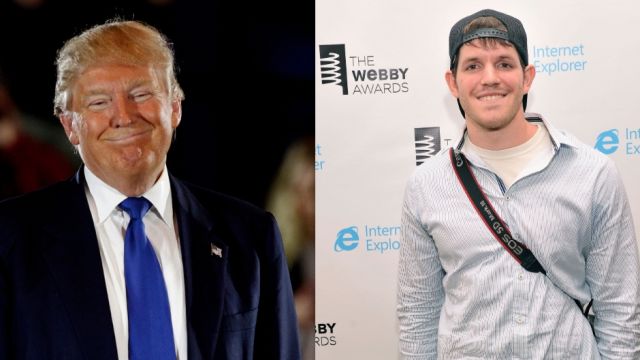 SMS
The Man Behind 'Humans Of New York' Roasts Trump In An Open Letter
By Katie Link
By Katie Link
March 14, 2016
Brandon Stanton says his decision to openly oppose Donald Trump is "no longer a political one. It is a moral one."
SHOW TRANSCRIPT

Donald Trump has another critic to worry about, and though he isn’t a politician or a celebrity, he has a pretty large reach.

Brandon Stanton makes a living telling other people’s stories on his blog, Humans of New York.

He’s published books, traveled the world and amassed a lot of fans. The Humans of New York Instagram account boasts nearly 5 million followers, and the Facebook page has more than 17 million likes.

He took to that Facebook page Monday and posted an open letter to the GOP front-runner, saying his decision to openly oppose Trump "is no longer a political one. It is a moral one."

Stanton criticized Trump for advocating the use of torture, encouraging violence and for comparing refugees to "snakes."

He wrote: "I am a journalist, Mr. Trump. And over the last two years I have conducted extensive interviews with hundreds of Muslims, chosen at random, on the streets of Iran, Iraq, and Pakistan. I’ve also interviewed hundreds of Syrian and Iraqi refugees across seven different countries. And I can confirm — the hateful one is you."

The timing of Stanton’s letter is important. Trump has made several comments about "hateful" Muslims in recent days.

"I think Islam hates us. There’s something, there’s something there that is a tremendous hatred, and we have to get to the bottom of it," Trump said in an interview with CNN.

This video includes clips from BBC, Donald J. Trump for President, Inc., MSNBC, and TEDx, and images from Getty Images.