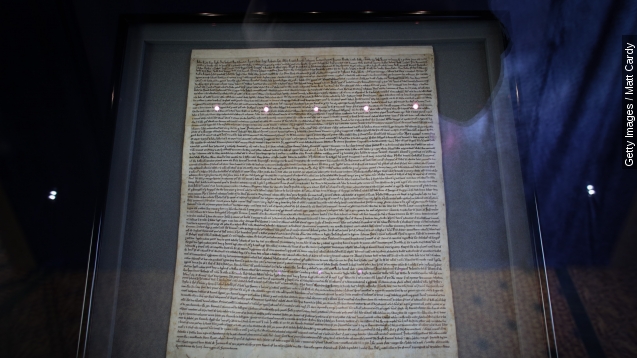 This is the Magna Carta, one of the most influential documents in western civilization and often cited as the foundation for our understanding of civil liberties. And June 15, this document turns 800 years old.

"What started out as a document of specific complaints from a group of barons has turned into an international symbol of liberty, without which we might not have the rights we value so much today," said Monty Python's Terry Jones for The British Library.

The name Magna Carta means Great Charter in Latin. At first, that was just a reference to its length, but over the past eight centuries, it has also come to stand for the significance of the document.

There are only four copies of the original document left — and all four of them were brought together earlier this year to mark the 800th anniversary of the charter's sealing.

And the document's actual text has been more or less phased out of English law. There's only three provisions from the Magna Carta still on the books: the freedom of the Church of England, the rights of London and — most significantly — the right to be judged according to the "law of the land," not the caprice of a monarch.

Much of the Magna Carta deals with archaic concerns, like fishing traps on the River Thames. But when the tyrannical King John of England reluctantly signed it in 1215, it created the basis for limiting royal authority under common law. (Video via BBC)

That was a powerful concept at the time. As Dan Hannan, a British member of European Parliament, wrote in The Wall Street Journal, "Above the king brooded something more powerful yet—something you couldn’t see or hear or touch or taste but that bound the sovereign as surely as it bound the poorest wretch in the kingdom."

The ideals laid out in 1215 can be found in documents from the U.S.' Declaration of Independence and Constitution to the United Nations' International Declaration of Human Rights.

The document's principles stretched across the world along with the British empire and persisted in colonized countries long after they declared independence. Figures like Mahatma Gandhi and Nelson Mandela referenced the Magna Carta while championing their causes.

Today, its influence might be more popularly known thanks to Jay Z. But for anyone who believes our leaders aren't above the law of the land, you've got the Magna Carta to thank for that.

This video includes images from Getty Images, the U.S. National Archives, and the Franklin D. Roosevelt Presidential Library and Museum.