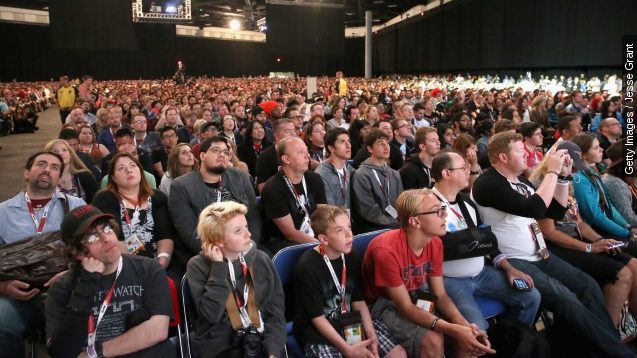 SMS
The Love-Hate Relationship With Comic-Con Film Footage Leaks
By Lexie Hammesfahr
By Lexie Hammesfahr
July 14, 2015
There are reasons to love and hate the people who leak film footage from Comic-Con. If we aren't careful, movie studios could stop showing previews.
SHOW TRANSCRIPT

This is a PSA for the people who leak exclusive Comic-Con footage, year after year.

We love you — but right now, we hate you.

We love you because in the age of social media, your desire to be the creator of a viral video is essentially the reason "Deadpool" was green-lit by 20th Century Fox.

"One year ago, to almost today, some [person] leaked that footage — and that's why we're standing here," Ryan Reynolds told the crowd in the iconic Hall H at this year's Comic-Con.

The footage Reynolds mentions was CGI-generated test footage created by Blur Studio for Fox. When it was leaked in 2014, the reaction was so strong the studio green-lit the film for a 2016 release.

In this case, Ryan Reynolds told the Niagara Falls Review, "It’s neat that Twitter and Facebook and Instagram can move mountains when used in the right way."

But this year, those platforms definitely were not used in the right way at Comic-Con when grainy cellphone footage of "Deadpool," "Suicide Squad" and "X-Men: Apocalypse" surfaced.

And for those of us who saw it but weren't one of the lucky Hall H audience members at those panels, it broke an understood pact with the studios proving to be a nightmare for them.

Before each panel, an announcement requests phones be put away while footage runs.

As a result of those who didn't obey that request, Warner Bros. was forced to release the high-res version of the Comic-Con "Suicide Squad" trailer. And they were not happy about it.

A statement from a Warner Bros. representative accompanied the trailer: "We regret this decision as it was our intention to keep the footage as a unique experience for the Comic Con crowd, but we cannot continue to allow the film to be represented by the poor quality of the pirated footage stolen from our presentation." (Video via Warner Bros.)

Director David Ayer also tweeted about the leak saying, "Shame our sneak peek Hall H footage was leaked. #notcool. It's unfair to the fans who waited in line. And not how I intended folks to see it."

And despite this yea'’s "Deadpool" leak, Reynolds announced official footage will be released in three weeks saying, "As much as I want the #deadpool footage from #SDCC officially released, the VFX shots aren't done yet."

Fox has stayed mum about the leaked "X-Men: Apocalypse" footage, but frequent leaks this year could make studios hesitant about debuting special looks at Comic-Con.

And let's be real for a second. Without those studios' support, Comic-Con could be a lot different.