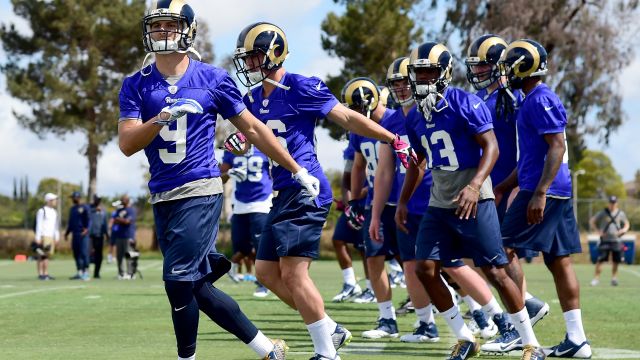 Move over, Kardashians. The Los Angeles Rams are coming to E!

The team reportedly just scored a new deal to appear on a reality TV show on E! called "Hollywood & Football."

It's the second TV show deal the Rams have in place for this year — not bad for the team's first season in L.A. The Rams will also appear on HBO's "Hard Knocks."

The E! show will follow six Rams players and their families as they make the journey from St. Louis, where the Rams were located before this season, to Los Angeles.

The second-largest U.S. city had been without an NFL team for more than 20 years. Now the Rams are back, and it appears they're cashing in on the bright lights and big city.

An E! exec told Variety, "We are excited to take viewers inside the exclusive lifestyles of these top athletes and their families as they navigate a new city, new friendships, new schools and the inevitable Hollywood gossip."

E! has a long track record of sports-entertainment content. The outlet currently hosts shows like "Total Divas," which follows female WWE wrestlers, and "WAGS," a show about the wives and girlfriends of famous sports figures. Both shows have seen solid success.

The six hourlong episodes of "Hollywood & Football" are expected to air this fall.