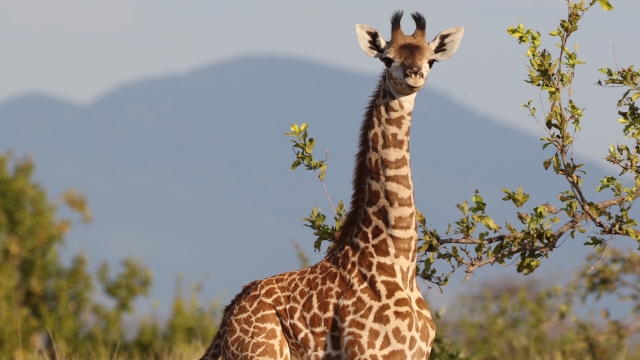 SMS
The Longest Neck In The Animal Kingdom Is Thanks To A Handful Of Genes
By Evan Thomas
By Evan Thomas
May 17, 2016
Giraffes are separated from their okapi cousins by just a few genetic quirks.
SHOW TRANSCRIPT

The only thing that separates giraffes from their smaller cousins — besides a lot of vertical space — is a handful of genes.

Researchers compared giraffes to okapi, their closest relative, to spot the genetic quirks. More than half of the giraffe's specialized genes control development of its skeletal and cardiovascular systems.

In other words, a giraffe isn't just a stretched okapi. To evolve such a long neck, giraffes had to evolve better hearts, too.

A giraffe's blood pressure is twice as high as that of other mammals. Its heart has to be small and muscular to send blood 6 feet upward against gravity.

"As its neck extended out, its cardiovascular system was also changing in tandem. And some of the same genes were actually controlling both processes in concert," said Penn State's Douglas Cavener.

Researchers want to test some of those skeletal growth genes in mice. They're not expecting long-necked mice, but they're hoping to see changes in skeletal structure.