The Link Between The 'Love Hormone' And Men's Weight Loss 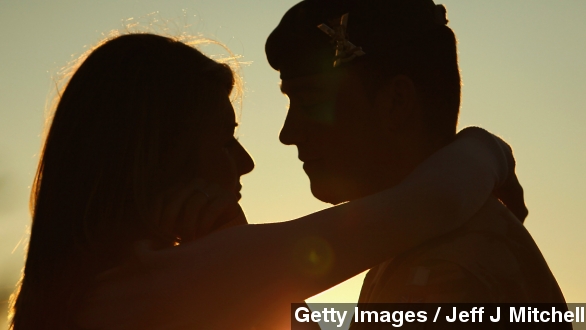 And just in case you need a refresher, oxytocin is a hormone released by the pituitary or "master" gland after sex, intense physical activity or even from a good ol' hug.

According to research presented Sunday at the Endocrine Society's 97th annual meeting in San Diego, oxytocin made men take in fewer calories.

Researchers took oxytocin and did what anyone would think of: They made it into a nasal spray and said, "Hey, squirt this up your nose!"

OK, so it didn't quite go like that. The researchers took 25 men, 13 that were a healthy weight and 12 that were obese. The men were asked to use the nasal spray after fasting. Some of them had the oxytocin nasal spray; others had a placebo, or a fake spray.

One hour after the spray, the men were given double breakfast portions. The researchers then measured how many calories the men ate.

The men repeated the experiment later but received opposite treatment from the first time — so if they had the placebo the first time, they'd have the oxytocin the second time and vice versa.

On average, the guys who got the love spray up their nose ate 122 fewer calories and 9 fewer grams of fat than those who had the fake love nose spray.

Which, in turn, led to the "love hormone" headlines. Hey, it's fun to say. Love hormone. (Video via Focus Features / "Anna Karenina")

An assistant professor of medicine at Harvard Medical School and the study's lead author, Elizabeth Lawson, said the study also needs to be done on women.