The Latest Plan To Save The Red Phone Box: Coffee Kiosks 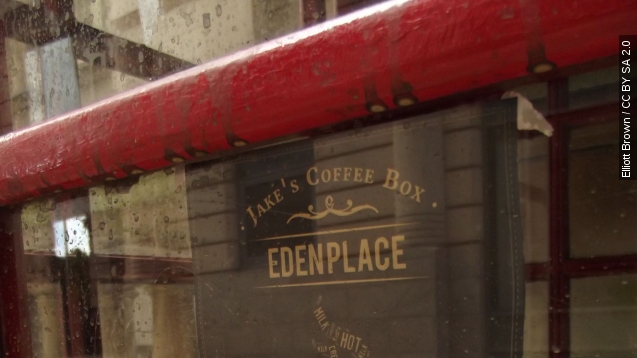 SMS
The Latest Plan To Save The Red Phone Box: Coffee Kiosks
By Steven Sparkman
By Steven Sparkman
August 5, 2015
The U.K.'s famous red phone box will never go extinct as long as people are willing to make coffee shops out of them.
SHOW TRANSCRIPT

The U.K.'s red phone booths have had a tough time since, you know, everyone started carrying a phone around. But they're not all going to the junk heap.

At least not while people keep turning them into something else. Phone boxes have been reincarnated as libraries, fish tanks and whatever this is.

So why not a coffee shop?

"I don't want to see something so iconic in the UK go to waste, so I think I've put it to better use now," manager Jake Hollier said.

This box in Birmingham serves coffee to commuters, and it'll hopefully have company. It's part of a charitable effort to turn unused phone booths into kiosks by an organization called Thinking Outside the Box. (Video via SWNS)

It's one of the more innovative ideas out there on how to make phone boxes a productive part of city life again, right up there with using them to charge mobile phones. (Video via BBC)

If you have your own ideas on how to save a phone box, you could test them out by adopting one from British telecom BT. It only costs a pound, and the company says you can turn it into whatever you want, including an art gallery, book exchange and heartbeat defibrillator.