The Large Hadron Collider Is Up And Running Again 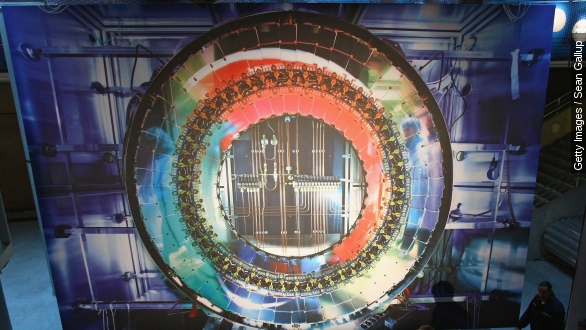 The Large Hadron Collider is back online.

CERN engineers restarted the particle accelerator Sunday, feeding beams of electrons into the collider for the first time since 2013.

"Since then, engineers have been upgrading the world's most powerful particle accelerator. It's able to operate at twice the energy as it was before," said the BBC's Pallab Ghosh.

"With run one and the discovery of the Higgs, we've discovered everything that our existing theory predicts."

That theory is the standard model, or what scientists sometimes call "the theory of almost everything." It describes almost all the interactions of almost all known subatomic particles, electromagnetism, and weak and strong nuclear forces.

The Higgs Boson was the last piece of the puzzle of the Standard Model, and CERN researchers figured it out in 2012. So … now what?

Scientists there are especially interested in supersymmetry, or the theory that each of the elementary particles of the standard model has a yet-to-be-identified partner particle.

If such particles exist, they could help explain things such as dark matter or where the universe gets its mass. (Video via Deutsche Welle)

The beams won't be accelerated to collision velocities until June, at which point researchers will be recording more than a gigabyte of data per second in case elusive new particles show up.

A spokesman for CERN said: "If something interesting appears in this new window we will see it. It might be two months from now or two years; we're not able to say."