The Jeb Bush PAC Mailer That Drew So Many Offhanded Remarks 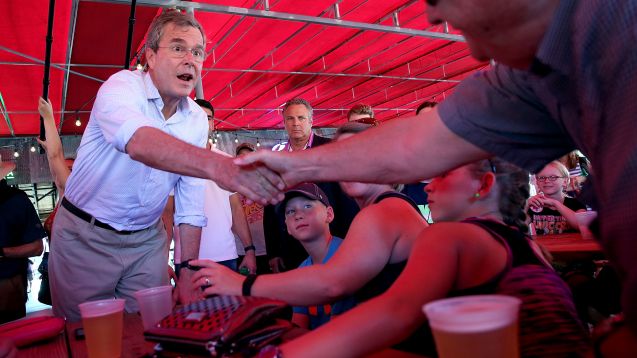 SMS
The Jeb Bush PAC Mailer That Drew So Many Offhanded Remarks
By Ben Levin
By Ben Levin
August 22, 2015
Jeb Bush's Super PAC, Right to Rise, sent an Iowa mailer on Thursday that contained a very strange image of its candidate.
SHOW TRANSCRIPT

Jeb Bush's Super PAC, Right to Rise, sent out 86,000 mailers to Iowa voters on Thursday in an effort to push its candidate above the mid-single digits in the polls.

And at first glance, the mailer seems fine. But look a little closer at Bush's left hand. Does something seem a little off to you?

Yeah, it's black. So two possibilities: Jeb Bush should probably get to a dermatologist, or someone is really bad at Photoshop.

And after an exhaustive investigation into Jeb Bush's left hand, we're able to report that it's probably just a Photoshop goof. Nice job, intern.

And another thing about the mailer: The background is a stock image of Cedar Rapids, Iowa.

So it's a funny picture, but also revealing: Current election law forbids Super PACs from any coordination with the candidates they support. (Video via Right to Rise)

Which means that while Right to Rise will spend tens of millions of dollars supporting Bush, it's illegal for the PAC to ask his campaign for a picture of him standing in front of an Iowa city. (Video via Bloomberg)

So someone found a generic picture of Cedar Rapids, combined it with an altered picture of Jeb Bush, and, well, this is what happens. And with 15 months to go until the election, it's probably not the last time we'll see some inadvertently hilarious campaign work.