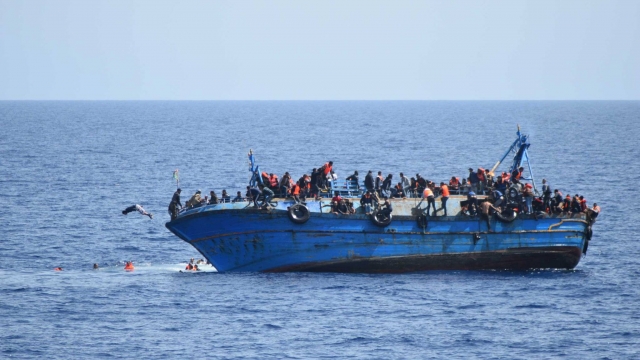 SMS
The Italian Navy Rescues At Least 500 Migrants From A Capsized Boat
By Melissa Prax
By Melissa Prax
May 26, 2016
At least 500 migrants were saved by Italy's navy after their boat capsized near the Libyan coast in the Mediterranean Sea.
SHOW TRANSCRIPT

A boat carrying hundreds of migrants across the Mediterranean Sea capsized on Wednesday, and Italy's navy was able to rescue at least 500.

According to the navy, there were too many people on board the boat and it became unstable, causing it to capsize. At least seven people died.

Photos show the boat tipping over near Libya's coast, forcing some people in the water while others tried to hold on.

It's becoming more common for refugees from the Middle East and Africa to use North African countries — like Libya —  as a gateway to Europe.

And some are predicting Italy will become a main entry point for migrants coming to Europe, as other countries like Greece are increasingly harder to get into.

The Italian navy saved more than 100 migrants in a separate accident later on Wednesday.

This video includes images and clips from the Italian Navy.