The Iraqi Army Has A Morale Problem 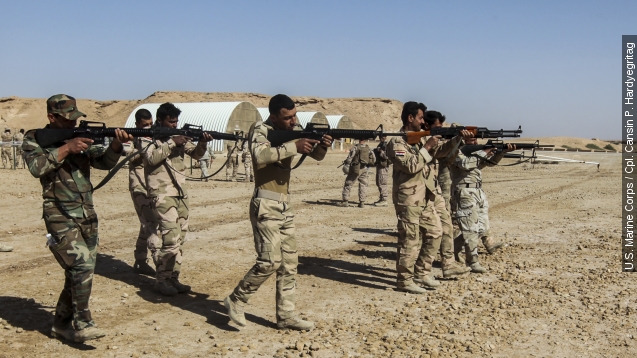 On paper, ISIS should be no match for the Iraqi army. We're talking about a U.S.-trained army equipped with tanks, fighter jets, hellfire missiles and armored Humvees. (Video via Iraqi Ministry of Defense)

ISIS showed up to Mosul in pickup trucks last June. And yet, two divisions of Iraqi soldiers — about 30,000 men — dropped their weapons and fled when confronted by just 800 militants.

This is the same army the U.S. spent eight years and $25 billion training and equipping. How is it even remotely possible that it can't stand up to ISIS?

"The Iraqi forces just showed no will to fight. They weren't outnumbered. In fact, they vastly outnumbered the opposing force," U.S. Secretary of Defense Ash Carter told CNN.

The morale problem is a big one, and just about everyone agrees former Iraqi Prime Minister Nouri al-Maliki bears a lot of the blame. (Video via Iraqi Ministry of Defense)

Fearing a coup against his own government, he staffed the army and police forces with Shiite loyalists, dismissing effective Sunni officers in the process. (Video via The White House)

Not only did that make for a weak fighting force, it explains the recruitment and retainment problem the Iraqi security forces face today.

With an army so politicized, it should come as no surprise that Sunni soldiers aren't terribly eager to fight on behalf of a Shiite-led government. (Video via Iraqi Ministry of Defense)

To be sure, there are other factors — among them, "the absence of regular payments, the inability to visit family members and a general sense that commanders weren't looking after their battalions" — according to one senior defense official who spoke to CNN.

U.S. officials, for their part, are downplaying the recent ISIS victory in Ramadi, and Secretary of State John Kerry says he is "absolutely confident" the situation could improve within days.