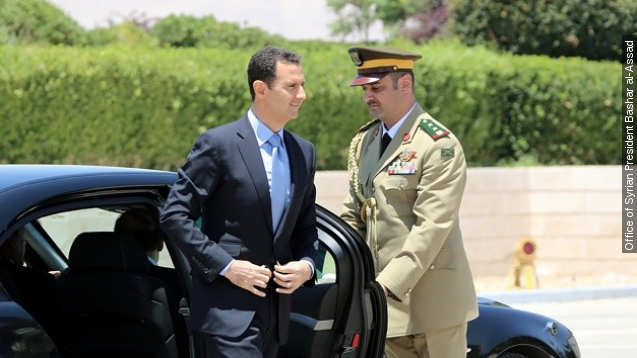 Iran has inked a deal to scale back its nuclear program in exchange for sanctions relief, and that's good news for President Obama, his Iranian counterpart ... and Syria's dictator.

In a message to Iran’s supreme leader, Bashar al-Assad reportedly said he was "happy that the Islamic Republic of Iran has achieved a great victory by reaching an agreement” — an agreement he will almost certainly benefit from.

To explain, the deal negotiating among world powers will unfreeze dollars in Iranian assets — north of $100 billion, by some estimates.

Critics of the deal fear Iran will use the extra cash to expand its influence in the region. Namely, by propping up its chief ally.

Since the war in Syria broke out four years ago, Iran has financially and militarily supported Assad’s government. (Video National Defense Forces)

Which has been fighting on multiple fronts against ISIS, Al-Qaeda-linked groups and rebels across an ideological spectrum seeking to oust him.

Iran’s also been using Syria as a supply route for getting weapons to the Shiite militant group Hezbollah in Lebanon. (Video via Al-Manar TV)

The cost of all this? Even while under sanctions, Iran was spending as much as $6 billion per year, according to the U.N. special envoy for Syria. Other experts estimate that figure is much higher.

Whatever Iran plans to do with its new inflow of money, it'll have to wait. Under the terms of the agreement, the U.N. nuclear watchdog must first verify Iran stuck to its end of the deal before sanctions are lifted.