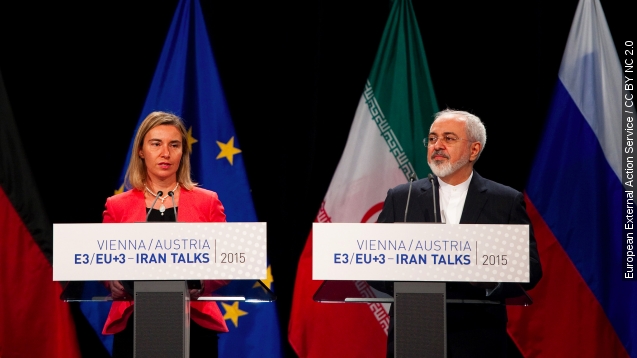 SMS
The Iran Deal, Explained
By Jake Godin
By Jake Godin
July 17, 2015
A nuclear deal has been signed by Iran and six world powers. Ideally it will allay the West's nuclear-related fears and Iran's economic woes. But how?
SHOW TRANSCRIPT

The Iran deal has been inked and signed — but what's actually in it?

The Joint Comprehensive Plan of Action, or JCPOA, is framed by four milestones, or days. Ideally, both parties will honor the deal, and progression from one to the other should go smoothly.

The first — Finalization Day. Iran and the P5+1 nations have finished negotiating the JCPOA, and it's now in the process of being submitted to and voted on in the United Nations Security Council as a new resolution.

Ninety days after that resolution is endorsed, it's Adoption Day. Each party will begin preparing to hold up its end of the deal — Iran by preparing the necessary nuclear restrictions, and the U.S. and European Union by preparing to scale back sanctions.

Things start picking up on Implementation Day. By this point, Iran would have converted its Arak research reactor, capped uranium enrichment and reduced its stockpile, removed two-thirds of its centrifuges, and limited its research and development. All of this will have to be OK'd by the IAEA.

On the flip side, the U.S. and EU will ease up on numerous sanctions. This includes sanctions on Iran's financial, energy, shipping and precious metals sectors. Some sanctions that specifically target people and entities will also be lifted.

The UN Security Council will also terminate sanctions-related resolutions. But that doesn't mean it can't slap them back on at a later date.

Finally, Transition Day. Once it's apparent that Iran is conducting a peaceful nuclear program, the rest of the sanctions from both the U.S. and EU will be lifted. Software, metals and nuclear-related materials will be unsanctioned, and the EU will even drop its arms sanctions. Any people or entities that didn't get off the list before will lose their sanctions, too.

As for Iran, it'll seek to ratify the Additional Protocol, which will continue to allow the IAEA to monitor all of Iran's nuclear sites.

But that's not the end of it. Even if it takes the full eight years to reach Transition Day, provisions within the JCPOA will ensure restrictions on Iran's nuclear program remain in place for at least 10 years and, at most, forever.

This video contains an image from the European External Action Service and music from Yinyues / CC BY 3.0.