Is This Cat Photo The Internet's Next #TheDress? 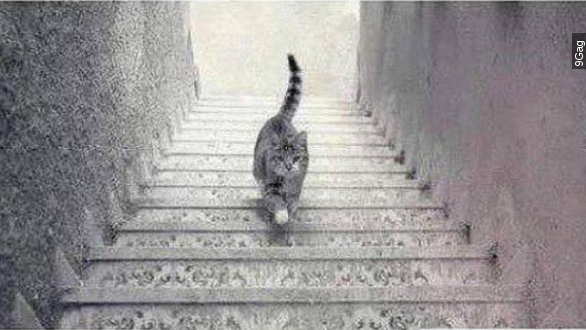 SMS
Is This Cat Photo The Internet's Next #TheDress?
By Jake Godin
By Jake Godin
April 10, 2015
Gold and white or black and blue? Up the stairs or down? Another example of visual trickery is taking the Internet by storm ... sort of.
SHOW TRANSCRIPT

Take a look at this cat going up some stairs. Or ... is it going down the stairs? No, it's up. Definitely up. Well, maybe. The folks on the "Today" show couldn't really decide, either.

"Me and Natalie are opposite on it."

It's the dang dress debate all over again! Well, kinda — this illusion hasn't exactly blown up as much as the blue-black debate did.

The photo was posted over on 9Gag and, from the looks of it, has garnered at least 44,000 views and over 3,000 comments since it was uploaded on March 29.

Compare that to the massive 36 million views Buzzfeed nabbed on its dress article and, well, it's not exactly that impressive.

Of course, this is the Internet, and viral images aren't necessarily contained to one site. Up-Down Cat has generated decent buzz over on image-sharing site Imgur with more than 18,000 views.

All right, so back to the illusion here. This ethereal cat is either going up or down these stairs, but which one is it?

Well, some say the lips on the stairs and their shadows signify a cat that's going down a staircase toward the viewer. Others look at the light behind the cat and say that's evidence the cat is going up the staircase, from a lighter area to a darker area.

Well, for now we're going with, "The cat is going down the stairs." Anyone who disagrees can take it up with our Optical Illusions Involving Cats Department.