The Hug: Political Weapon, For Better Or Worse 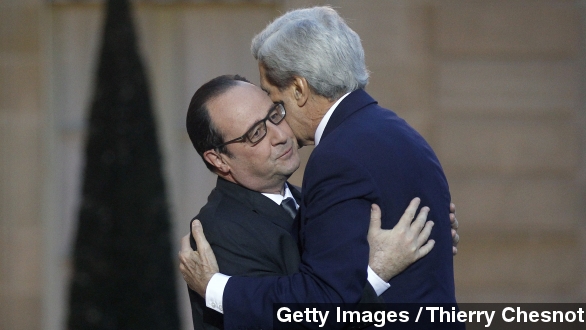 SMS
The Hug: Political Weapon, For Better Or Worse
By Christian Bryant
By Christian Bryant
January 16, 2015
John Kerry was criticized after an odd hug with the French president, highlighting the politics behind the one-on-one embrace.
SHOW TRANSCRIPT

"My visit to France is basically to share a big hug with the people of Paris," U.S. Secretary of State John Kerry said.

U.S. Secretary of State John Kerry kept that promise Friday when he embraced French President Francois Hollande. That hug follows attacks on a satirical newspaper and a Kosher market in France that killed 18 people.

Despite his efforts to extend support to France on behalf of the U.S., Secretary of State John Kerry is being criticized for the this close encounter, with some saying it was a political faux-pas.

"I thought it was an SNL skit," Fox Business' Melissa Francis said.

"Maybe not the hippest choice in the world. I don't know," CNN's Jim Acosta said.

"This is not American diplomacy at its best," former U.S. Ambassador to the U.N. John Bolton said.

Hugs have a history of being politicized — depending on who you're hugging.

A more recent example: Chris Christie was seen bro-ing it up on Dallas Cowboys owner Jerry Jones during a Cowboys win against the Detroit Lions Jan. 4.

A writer for The Daily Beast says, on the one hand, "Jerry Jones represents the worst qualities about the one percent. I mean, if you were casting a villain, he’d be on your short list." But on the other, "one could view Christie’s support of Dallas as a sort of profile in courage. At least he’s not pandering."

In a less divisive embrace, Obama hugged a nurse recently cured of Ebola back in 2014. It was a clear photo op, but the purpose was clear also: Obama was attempting to cure Ebola fears at a time when misinformation was running rampant.

"Yes, he is the president and he was not at all concerned," White House Press Secretary Josh Earnest said.

It's hard to tell how the Kerry-Hollande hug will affect diplomacy, but the French seem pretty chill about it. If they can forgive an untimely absence from their unity march...

"We have felt the support of the Americans and that's what matters," French Ambassador to the U.S. Gérard Araud told CNN.

...then we're sure Kerry's "political faux-pas" is of no real consequence.