The Hottest And Weirdest Looks At The 2015 AMAs 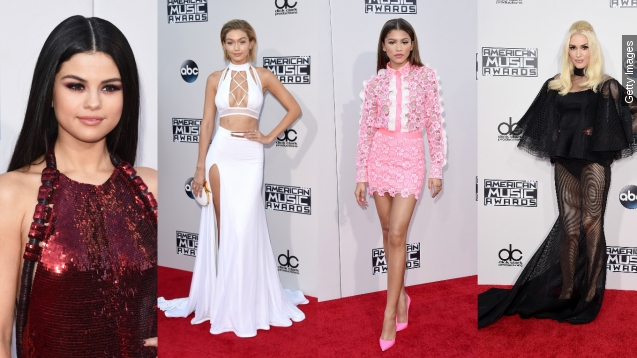 The American Music Awards are always such a great awards show for artists to make both fabulous and unusual fashion statements. And we definitely got a melting pot of looks on Sunday's red carpet.

Carrie Underwood slayed — per usual. This time, she stunned in a sequin nude Elie Tahari gown with a sequin cape.

Selena Gomez stepped onto the carpet in a red sequin gown with a low-cut back. Accessories were minimal — which was totally fine, because her red, smoky eye makeup was enough to turn heads, if the open back on her dress didn't do the trick.

Zendaya never disappoints in the fashion department, and tonight was no exception. The actress was pretty in pink in an Ungaro ensemble and pink Christian Louboutin pumps.

Gigi Hadid was probably our favorite look of the night. The supermodel looked fresh-faced and jaw-droppingly gorgeous in a custom Bao Tranchi two-piece gown that felt like a beachy escape in the middle of November.

On the more unusual end of the fashion spectrum: Gwen Stefani. Her sheer and flowing black gown was an interesting look for the singer. The black was a little harsh against her blonde hair and fair skin.

Another interesting look? Singer Z LaLa, who showed up with an octopus on her dress.