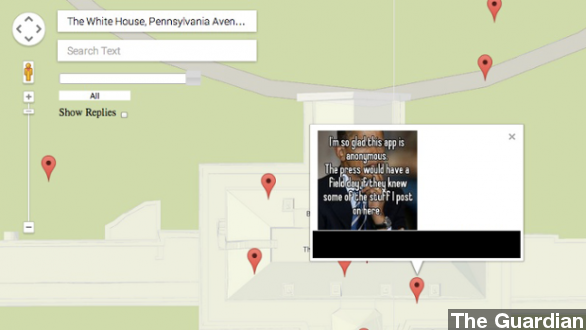 Whisper works like this: You have something to share. You can do that anonymously by superimposing text over an image and sending it to other users.

Two reporters from The Guardian spent three days at Whisper's headquarters in California, and later wrote, "Whisper has a secret." That secret is "an in-house mapping tool that allows its staff to filter and search GPS data, pinpointing messages to within 500 meters of where they were sent."

The Guardian reported Whisper could determine a user's location even if that person opted out of a geolocation service — which was implemented earlier this year. Whisper reportedly rewrote its terms of service allowing the company to establish broad locations of users.

The company is also said to be cooperating with the U.S. Department of Defense by sharing information with researchers who are studying mentions of self-harm and suicide.

The Guardian articles come at a time when personal privacy is under attack. Consider the number of data breaches, leaked photos and security flaws mentioned in the past few months.

But Whisper's Editor in Chief Neetzan Zimmerman (NEET ZIN) essentially said this isn't one of those instances and defended his company's policies in a flurry of tweets. In those tweets, he explains the geolocation service is opt-in, not opt-out, exact location data isn't stored and is "technically" impossible to attain. (Video via Adweek)

The Guardian and Whisper had a partnership that allowed Guardian journalists to write stories using Whisper posts. Zimmerman claims The Guardian's CEO knew about the company's policies and reporters published stories with knowledge of its practices.

Then, there's this. As you can imagine, Zimmerman wasn't happy about The Guardian's latest articles.

Although Zimmerman decried claims users are being tracked, Whisper monitoring users isn't a new concept and has been reported on before.

In January, a Forbes writer said users should be "wary" of Whisper's claims of anonymity because they were being tracked by the company. Zimmerman denied "tracking" users Thursday, but Forbes quoted Whisper founder Michael Heyward, who said, "We look at everything, whether that’s algorithmically or with human eyes." He said this was for safety purposes so bullies and trolls aren't attacking other users.

And regarding handing information over to the government, back in May a Wired writer said Whisper might not have a choice. An attorney with the Electronic Frontier Foundation told the outlet, "In many cases, they’re legally compelled to comply with search warrants and subpoenas."

Whisper has reportedly been working with news organizations to promote content on its app. On Thursday, both The Guardian and BuzzFeed announced they are no longer partnering with Whisper.

Showcasing The Coolest Innovations In 5G