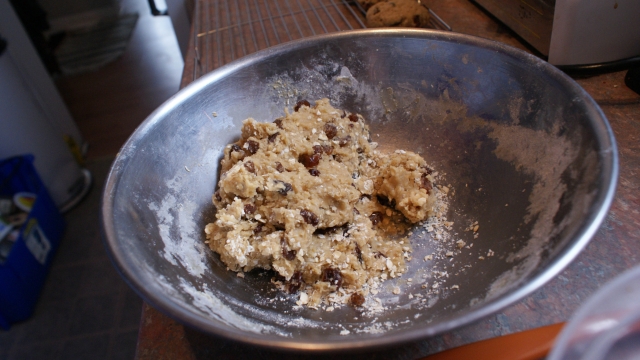 SMS
The Government Made Gross Cookie Dough Facts So You'll Stop Eating It
By Ryan Biek
By Ryan Biek
June 30, 2016
A spoonful of E. coli, anyone?
SHOW TRANSCRIPT

This time, it's not your WebMD.com-obsessed grandma saying raw cookie dough is bad for you. It's the Food and Drug Administration.

It's not the usual spiel of salmonella in raw eggs either. The FDA warned in recent months, 38 people from 20 states got sick from a certain strain of E. coli. And for many, it was raw flour that made them sick.

The cases were partially linked to a General Mills facility in Kansas City, Missouri. In May, the company started a voluntary recall of flour sold in November and December of last year.

But the FDA is now trying to make it clear that, in general, eating raw flour is a bad idea.

A senior adviser for the agency said, "Flour is derived from a grain that comes directly from the field and typically is not treated to kill bacteria."

So let's say an animal relieves itself in the field. That bacteria isn't necessarily cleaned out. Baking, however, kills it.

A different FDA adviser told The New York Times most companies actually heat-treat what they present as "raw" cookie dough. So your favorite ice cream topping is still probably safe.

But the FDA warns eating the dough directly isn't the only thing that can make you sick. It also said not to play with the dough and to wash your hands before and after touching raw flour.

This video includes clips from Ben & Jerry's, KSHB, WCCO and KRBK and images from Getty Images and Gwen / CC BY 2.0.