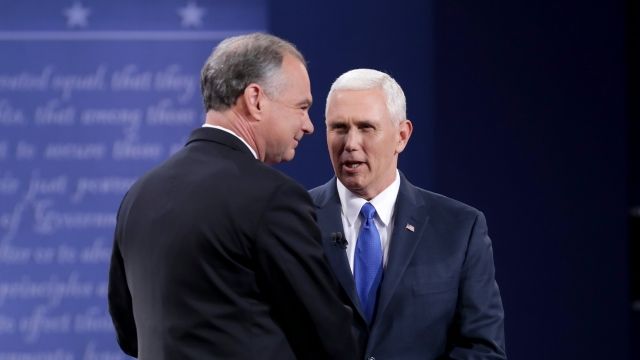 SMS
The GOP Said Mike Pence Won The Debate Before It Even Started
By Matt Picht
By Matt Picht
October 4, 2016
The GOP accidentally spilled the beans early on who "won" the VP debate. Spoiler alert — it wasn't Tim Kaine.
SHOW TRANSCRIPT

Good news: We no longer need to hold the Vice Presidential debate, because the GOP has already declared a winner!

Yes — in a shocking upset, the Republican Party has declared its vice presidential nominee Mike Pence the victor of Tuesday's thrilla in Virginia.

SEE MORE: Mike Pence Thinks Stop-And-Frisk Works ... But Does It?

It was a tough call, but in the end, Pence's relentless focus on Donald Trump's vision for America put him over the — wait, actually the post appears to be broken now. Weird.

So, broadcasting a rough draft of its post-debate talking points is a bit embarrassing for the GOP, but it's not surprising the party's already prepping for Pence's performance.

Both Pence and Tim Kaine are going into this debate with an agenda. Thanks to this technical snafu, we now know what Pence wants to talk about: the economy, Hillary Clinton's scandals and Donald Trump.

We also know that no matter how well Kaine does on the debate stage, he's probably not going to get the GOP to concede victory.