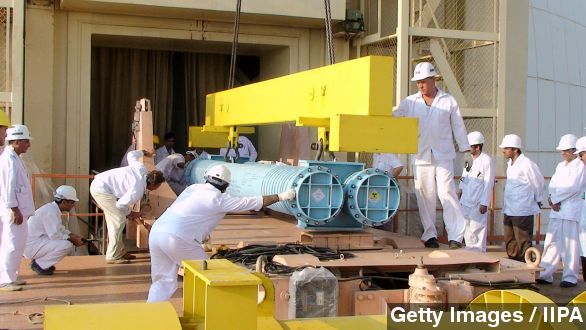 This is the letter 47 Republican senators sent Iran's leaders, warning the country against striking a nuclear deal with the U.S.

"I think it's somewhat ironic to see some members of Congress wanting to make common cause with the hardliners in Iran," President Obama said.

Essentially, their letter says any agreement signed by President Obama will unravel when he leaves office —  which we’ve heard plenty of times before.

The president has made pretty clear he plans to bypass Congress when it comes to negotiating a deal — a deal Republicans would really like to prevent from happening. Hence their letter.

A letter that was, at the very least, a breach of normal diplomatic protocol — not unlike the way Israeli Prime Minister Benjamin Netanyahu was invited to Washington without the White House's approval.

But this sort of meddling in negotiations with foreign governments, while unusual, isn't unheard of.

In 1968, then-presidential candidate Richard Nixon tried to undermine the Vietnam War peace talks for his own political gain. Or so the story goes. (Video via Richard Nixon Foundation)

While he never admitted to it, Nixon's campaign was accused of reaching out to the government of South Vietnam, urging it to refuse a deal with then-President Lyndon B. Johnson, promising a better one if Nixon were elected. (Video via U.S. National Archives)

Many historians say, at the very least, that would be a pretty clear violation of the Logan Act. (Video via Richard Nixon Foundation)

The law was named for this guy — a Pennsylvania state lawmaker who went behind President John Adams' back and tried negotiating with France.

Of course, in the 216 years the law's been on the books, no one's been prosecuted for violating it. The Senate's Republicans surely won't be either.

They are pushing for a bill that requires Congress vote on the final deal. The deadline for that deal is March 24. (Video via Senate Republicans)

This video includes images from the U.S. Department of State, Albert Rosenthal via the National Library of Medicine and Asher Brown Durand via the U.S. Navy.