The GOP's Meg Whitman Is Considering Supporting Clinton Over Trump 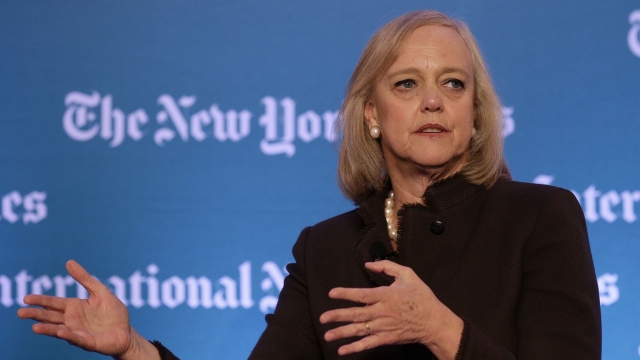 Reports are circulating that Meg Whitman, a high-profile Republican donor, is considering supporting Hillary Clinton instead of Donald Trump.

Whitman reportedly attended an exclusive Republican summit hosted by Mitt Romney on Friday. A source told ABC that Whitman asked, "'Is it not reasonable to support Hillary Clinton?' given all the awful things Trump has said."

Whitman, the CEO of Hewlett Packard Enterprise, has a long history with the Republican Party. She was the finance co-chair for Romney's and Chris Christie's presidential campaigns,and she launched an unsuccessful bid for California governor in 2010.

But she's been pretty open about her disdain for Trump.

Whitman also grilled House Speaker Paul Ryan at the summit about how he could throw his support behind Trump. One source told Politico she even compared Trump to Adolf Hitler and Benito Mussolini.

Whitman seems to be in a similar position to a lot of Republicans, who want to stay loyal to the party but are unwilling to support Trump.

Even after Trump secured enough delegates to win the party's nomination for president, some Republicans are still speaking out against him.

"Presidents have an impact on the nature of our nation, and trickle-down racism, trickle-down bigotry, trickle-down misogyny, all these things are extraordinarily dangerous to the heart and character of America," Romney told CNN.

Whitman reportedly didn't say whether she would be throwing her financial support behind Clinton or just her vote.

This video includes clips from Bloomberg, Speaker of the House Paul Ryan and Donald J. Trump for President Inc., and images from Getty Images.