The Good And The Bad Of Greece's Bailout Deal 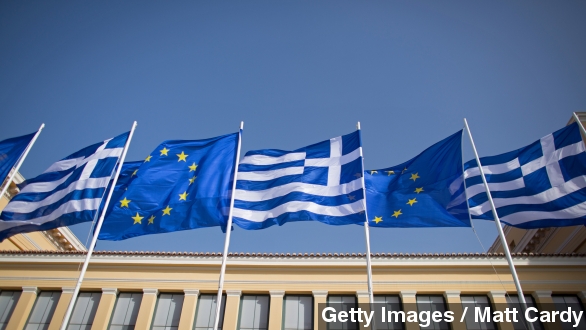 SMS
The Good And The Bad Of Greece's Bailout Deal
By Matt Picht
By Matt Picht
February 22, 2015
The four-month bailout extension isn't what the new Greek government promised its voters, but Greece did manage to find a few silver linings.
SHOW TRANSCRIPT

Greek Prime Minister Alexis Tsipras has declared a minor victory for his far-left government. They've reached a tentative deal with their Eurozone creditors to keep the cash flowing for the next four months.

"Yesterday we took a decisive step, leaving austerity, the bailout deal and the troika behind us," Tsipras said.

But the deal looks much different in the financial press, which quickly dubbed the agreement a one-sided victory for the E.U. nations who hold the purse strings on Greece's much-needed bailout loans. (Video via Sky News)

So, who really came out on top of the latest Greek drama?

Let's start with the obvious — points to Tsipras for keeping the lights on. By securing a deal, his government's staved off catastrophic financial collapse for at least another four months.

But the deal has come at a heavy price for the new Greek government. E.U. negotiators managed to force Tsipras to walk back several of the demands he promised to make during his election campaign.

Paul Mason, a Channel 4 reporter, asked Eurogroup president Jeroen Dijsselbloem, "What do you say to the Greek electorate, whose democracy you've just more or less trashed?"

Chief among the concessions is extending the current bailout program at all, after Tsipras promised to reject it outright. Instead, the new government will now have to freeze its rollbacks of the much-maligned austerity measures.

And despite very vocal protests, Greece is still negotiating with the Troika of lenders — the ECB, IMF, and European Commission — albeit under a new name. That's another broken promise Tsipras will have to pay the political price for.

The silver lining in all this for the Greek government is their ability to submit a new program of financial overhauls. Those reforms still have to go through the E.U. lenders for approval; but Greece has at least clawed back some control from its debtors.

Greek Finance Minister Yanis Varoufakis told reporters, "Once you have a relationship of equals, instead of the relationship we used to have, the collaboration can be a lot more fruitful."

Greece also managed to relax some of the economic targets it was expected to meet under the bailout deal, giving the government a bit more freedom to spend money.