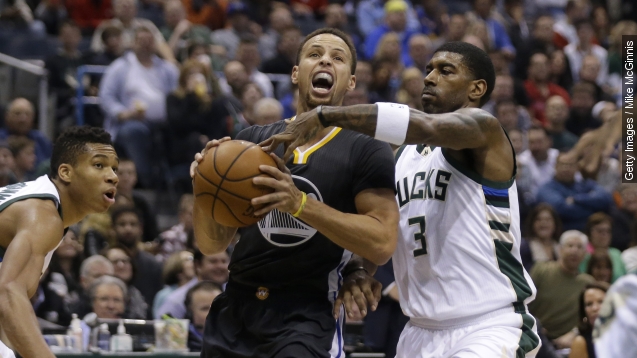 "It just feels like a loss, a feeling that we haven't experienced in a while," Draymond Green said after the game.

And while seeing Steph Curry and company walk of the court in defeat is probably jarring for some NBA fans, the loss wasn't totally inexplicable.

Saturday marked the final game of a seven-game road trip for Golden State, a test so tough no team has ever emerged from a trip of that length without at least one loss. (Video via Eastbay)

To add to the travel woes, the Warriors' previous game was just the night before, on Friday against Boston.

That game took two overtimes to close out, with Warriors stars Stephen Curry, Draymond Green and Andre Iguodala all logging more minutes than any other game so far this season.

"Unfortunately it just looks like the schedule and the road trip finally caught up to us tonight," interim coach Luke Walton told ESPN after the loss.

History also may have foreshadowed a Warriors loss Saturday night. The team's 28-game win streak, which includes four wins at the end of last season, is the second longest in NBA history.

That's behind only the 33-game run by the Los Angeles Lakers in the 1971-72 NBA season, a streak that also ended in Milwaukee.

Even with all this, it's not like too many people saw last night's loss coming. Milwaukee came in with a 9-15 record, and the Warriors had an unusually poor shooting night, going 41 percent from the floor and just 6-of-26 from three.

And just because the Warriors finally lost doesn't mean they're done chasing history. Analysts say they have a realistic chance of equaling the '95-'96 Bulls' record of 72 wins in a season. Though, even for this team, that's still a long way out.