The Golden State Warriors Are Mortal, After All 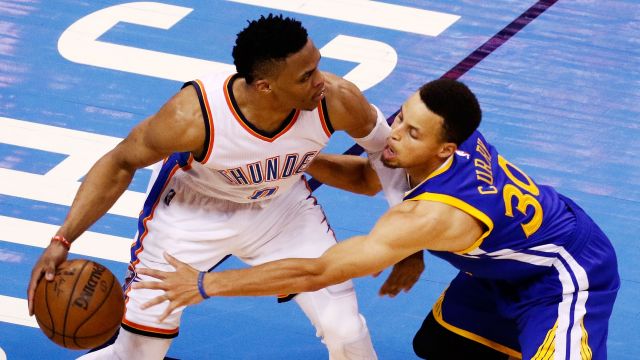 Arguably the best team in NBA history might be making an early exit from the playoffs.

The Golden State Warriors have their backs against the wall in the Western Conference Finals after dropping another game to the Oklahoma City Thunder on Tuesday night. The loss brings the Warriors one game away from getting bounced.

But NBA MVP and Warriors guard Steph Curry says this isn't the way they're going out.

"The series isn't over. In our locker room, it's all this frustration, trying to figure out how we can get back to being ourselves," Curry said.

But Curry will need to take his words at the press conference and put them into action if the Warriors want to stay in this one. A comeback from a 3-1 series deficit has only happened nine times in NBA history — roughly a 4 percent chance.

One thing is for certain, though — if the Warriors want to pull this one off, Curry will have to be better, and someone's going to have to stop Russell Westbrook.

Curry, who has been injured on and off throughout the playoffs, shot 30 percent from the field. He scored 19 points and committed six turnovers.

On the Thunder side of the ball, Westbrook had himself another big day. Westbrook scored 36 points and nabbed 11 rebounds. He's scored 30 points or more in the last two games.

The series now heads back to Oakland, where the Warriors will try to use their 39-2 regular season home record to their advantage. Game 5 tips off Thursday.

This video includes clips from Under Armour and Jordan, and images from Getty Images.