The Golden Globes Have Given Us Some Pretty Funny Acceptance Speeches 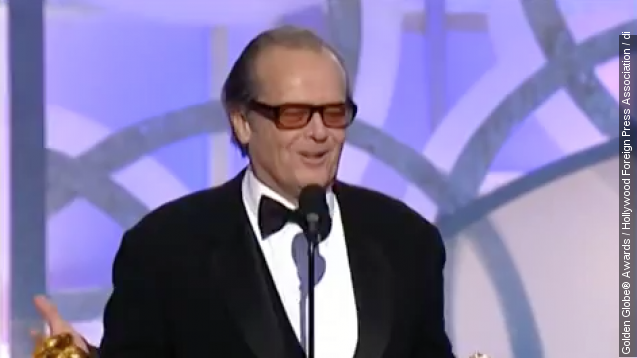 SMS
The Golden Globes Have Given Us Some Pretty Funny Acceptance Speeches
By Lexie Hammesfahr
By Lexie Hammesfahr
January 6, 2016
A lot of free booze and a relaxed environment bring out the best in those who attend Hollywood's biggest party.
SHOW TRANSCRIPT

Hollywood's biggest party — aka the Golden Globes — is right around the corner. It's a way more relaxed setting than other ceremonies, and that's reflected in acceptance speeches. (Video via NBC)

Take Jack Nicholson, for example. When he accepted his 2003 best actor award for "About Schmidt," he readily admitted to popping a Valium before the show. Which led to moments like this.

"Doesn't Nicole look lovely with her old nose?" he said.

And winners frequently thank God in their speeches, but Meryl Streep put a nice little spin on the gesture when she accepted her 2012 Globe for her leading role in "The Iron Lady."

"I just want to thank my agent, Kevin Huvane and God — Harvey Weinstein," she said.

Weinstein, of course, is the legendary studio head known for his ruthlessness and genius.

And you know a speech is going to be good when it starts with a threat. At least, that's what Robert Downey Jr. was (probably) hoping in 2010 when he won for "Sherlock Holmes."

"If you start playing violins, I will tear this joint apart," he said.