The Future Of Japanese Whaling: Heritage Vs. Conservation 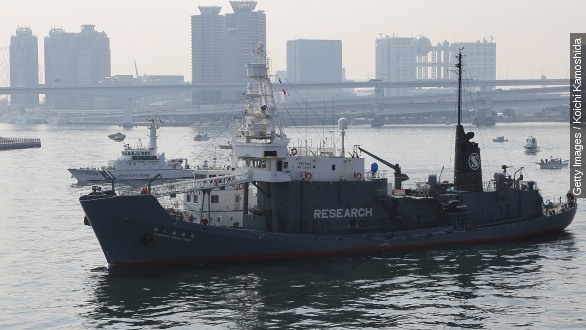 When Japanese whaling ships returned this weekend after their first nonlethal venture into the Antarctic, Japan's minister of Agriculture, Forestry and Fisheries was quick to tell Japan News Network one thing. (Video via Japan News Network)

The country plans to resume whaling.

The Future of Japanese Whaling

The International Court of Justice ruled in March of last year that under its then research plan, Japan could not engage in whaling in a region of the Antarctic known as the Southern Ocean Whale Sanctuary. (Video via Sea Shepherd Conservation Society)

Japan's plan allowed for as many as 850 minke whales to be taken a year — along with 50 humpback and 50 fin whales — for research. (Video via Tourism and Events Queensland)

So Australia filed a suit in the International Court of Justice in 2010 to stop the whaling in the waters, part of which are just south of its coast. (Video via ABC Australia)

The court decided, among other things, the limited research produced by the government-subsidized research body — two peer reviewed papers from 2005 to 2011 — was not enough to justify the taking of whales in protected waters. (Video via International Court of Justice)

So, in response, Japan has proposed a new plan, lowering its sample of minke whales from 850 to 333 and saying it will abide by the court's decision.

The meat from the whales Japan takes for research has been largely sold — which is allowed under International Whaling Commission regulations — ostensibly to raise money for further research.

But researchers, including scientists at the International Whaling Commission, have expressed skepticism about the actual value of killing whales for research, arguing nonlethal methods are just as effective.

In Japan, there is a lot of support for whaling, something Japanese officials have argued is part of the country's heritage. There are records of whaling going back centuries. (Video via NTDTV)

But commercial whaling, which started in Japan in the early 20th century, drove many whale species to the brink of extinction before a moratorium on commercial whaling went into effect in 1986. (Video via New Zealand Maritime Museum)

Japan is currently looking to return to the Southern Ocean by the end of 2015.

This video includes images from Getty Images and music from Tampa Taiko / CC0 1.0 and Chris Zabriskie / CC BY 4.0.