The Future Of Cars Does Not Involve Drivers 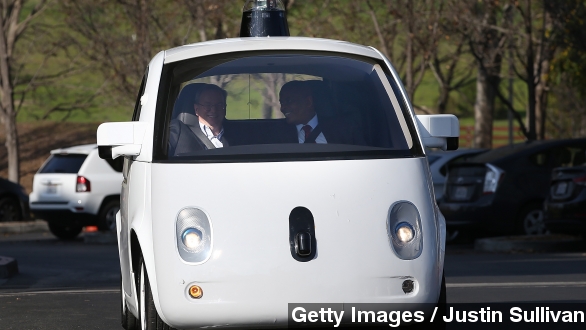 SMS
The Future Of Cars Does Not Involve Drivers
By Ben Lawson
By Ben Lawson
March 22, 2015
It might not be too long before humans can sit back and let cars drive themselves.
SHOW TRANSCRIPT

Imagine sitting back and reading a book while your car takes you to your destination or maybe recouping from a night out during the morning commute. What we're saying is imagine a reality where a car doesn't need you to drive it.

"Is the future of the industry autonomous? Are these things really going to be a reality?" asked a CNN reporter.

"Autonomous cars will definitely be a reality. A Tesla car next year will probably be 90 percent capable of autopilot," said Tesla CEO Elon Musk.

This is the Tesla Model S. It's just one of the many vehicles that won't need a driver at the wheel on the highway.

"We are now going to turn on the autopilot system. Engaging it now. My hands are off the steering wheel; my foot is off the accelerator," said a Tesla driver.

Tesla CEO Elon Musk announced last week that he plans to turn on autopilot in the Model S sometime this summer, although it's still not clear whether that feature is technically legal in the U.S.

So how officials handle Tesla's announcement could be a good indicator of when we'll see other companies start to roll out their cars with similar autopilot features.

Nearly every major car company, plus Google, is developing a self-driving vehicle.

But on Sunday the tech will get its biggest test yet when Delphi takes a self-driving car on a cross-country trip. Delphi has placed its system in an Audi Q5 SUV.

It'll be a major feat, the longest trip for an autonomous car in real-world conditions. (Video via Delphi)

Delphi doesn't make cars itself, but it's a major supplier of parts to the auto industry. It's known for major innovations like the first electric starter and dashboard radio.

Delphi's design, like most others, is only capable of driving autonomously on the highway.

Through a series of sensors on the vehicles' exteriors, self-driving cars can tell if the road is slick with snow, read speed limit signs and detect if a driver ahead unexpectedly hits the brakes.

"For example, if there is a cyclist in the bike lane, the vehicle understands this is a cyclist. Not another car or pedestrian," said a Google driver.

Self-driving cars can't handle the confusion of urban areas just yet. Currently they're only legal for testing in Nevada, Florida, Michigan, California and Washington, D.C.

So when will we actually get our hands on a car that drives itself? In spite of Tesla's ambitious plans, the current estimate is around 2020, Tesla's ambitions aside.

That's assuming government regulators are satisfied with their safety. And there are still a few lingering questions to hammer out.

Such as, who pays for the damage when a vehicle’s autopilot makes a mistake? Will it be the manufacturer or the vehicle's operator? Will insurance companies even cover these vehicles?

But despite the numerous safety concerns raised in the "great autonomous car debate," a former General Motors exec says safety could end up being the biggest selling point.

In fact, many people who have been in a self-driving car say the tech is so safe, it's actually kind of dull.

"So I'm just pushing the plus button, release the steering wheel and the pedals and it’s not really more dramatic than that," said a Volvo driver.

So yeah, we're probably still five years off from autopilot replacing cruise control. And when you really look at it, that in and of itself isn't really a world-changing development.

But according to a report from consulting firm McKinsey & Company, add 15 years and the impact of automated vehicles could be huge.

See, it's when cars get to the point that they no longer need a driver at all that things actually start getting interesting.

"You arrive at a shopping center and decide you want the car to park itself. You get out of the car, press a button on your smartphone and the car will go park itself."

Or imagine an Uber-like service that nearly eliminates the need to own a car because you can just order one on your smartphone.

And considering the average American loses an estimated 111 hours in traffic each year, time spent in the car could be used to boost productivity — or more likely boost your "Angry Birds" score.  (Video via 20th Century Fox / "Office Space")

In short, self-driving cars are definitely on the road to reality. We'll probably just have to settle for boring ol' autopilot for the next few decades until cars are cruising around without humans in the drivers' seats.