The French Government Dissolving Isn't All That Chaotic 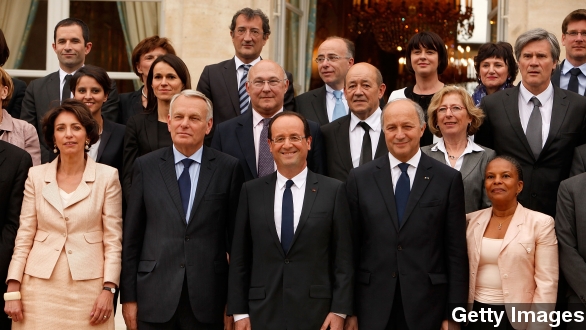 SMS
The French Government Dissolving Isn't All That Chaotic

By Sebastian Martinez
August 25, 2014
The French government has dissolved, but what does that really mean? Well, it's kind of complicated. But it's not anarchy.
SHOW TRANSCRIPT

The French government has dissolved, but before anyone bids it adieu, let's look at what that really means.

No, the country hasn't fallen into anarchy, and the only revolution that's happened is a kind of complicated political one.

Basically what's happened is, because of internal conflict between President François Hollande and two of his ministers, Hollande ordered the prime minister to get rid of the current cabinet — well, part of it — and make a new one. (Video via President of France)

The two ministers Hollande will be getting rid of — Economy Minister Arnaud Montebourg and Education Minister Benoit Hamon — happen to be the only two who have spoken out against fiscal austerity measures imposed by Germany.

Montebourg told the press on Monday he couldn't reconcile his convictions with those of Hollande, and felt he must "retain his liberty." (Video via i-Tele)

It was his interview with Le Monde on Saturday, in which he criticized Hollande and his prime minister, Manuel Valls, and their financial policy, that sparked Hollande's action.

Germany, as one of the most stable economies in Europe, has more or less gotten to be in the driver's seat when it comes to getting other European economies out of the hole, so in going against Germany, Hollande says Montebourg crossed a yellow line — the French version of crossing a red line. (Video via Deutsche Welle)

And that's mainly because France could use the help. The country's economy hasn't exactly been thriving.

As a writer for The Guardian notes, France's, "rising unemployment, weak growth, a disaffected business community, low productivity and high taxes" have made the country the latest "sick man of Europe," taking up the mantle of the continent's most vulnerable economy from the likes of Greece and Italy.

So the government dissolving, despite not being as dramatic as it sounds, is still a pretty big deal. Nevertheless, it doesn't necessarily mean drastic changes.

FRANÇOIS MALLET, CNBC ANALYST: "Well I do not think there will be any real changes as such. Yes there will be changes in terms of Minister of Economy, quite likely ... does that mean major change in the government policy, and especially trying to control the budget defecit? I doubt it."

This government didn't last long either — it was just convened in April. Hollande has ordered a new government to be formed as quickly as possible.