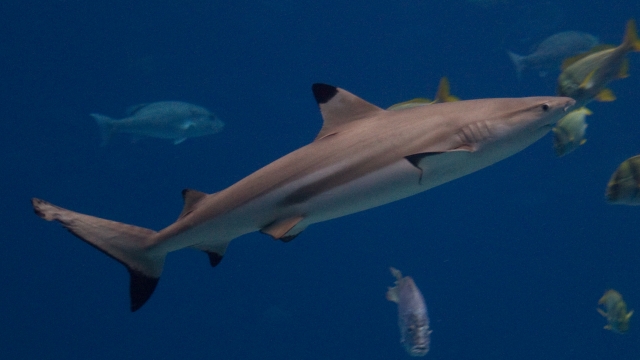 SMS
The Florida Coast Is Full Of Sharks And Scientists Want To Know Why
By Grant Suneson
By Grant Suneson
February 14, 2016
Blacktip sharks were weeks late for their winter migration to Florida, but now that they've arrived, they've pretty much taken over.
SHOW TRANSCRIPT

Like Monarch butterflies or your grandparents, blacktip sharks love heading south for the winter. But this year the sharks didn't show up for their Florida migration on time.

Florida Atlantic University biologist Dr. Stephen Kajiura studies the blacktips and their migration patterns down the Atlantic Coast. He shot this video after waiting weeks for the blacktips to make an appearance.

The sharks will typically first arrive in mid-January, but the waters off the coast of Palm Beach were empty until the end of the month.

"The interesting thing is these sharks are right up against the shoreline. You could stand on the shore and toss a pebble and hit a shark, they're that close," Dr. Kajiura said.

So what's up with the bizarre behavior from the sharks? Part of the reason could be 2016's particularly strong El Nino. The phenomenon's effects can be felt across the globe, changing the behaviors of sharks and other marine animals including sea snakes, sea lions and seals.

Warming ocean temperatures could also play a role. If waters farther north are staying warmer for longer, then there's less reason for the blacktips to leave on time.

But just in case you're afraid the influx of sharks might spoil your Palm Beach vacation, Dr. Kajiura said the blacktip sharks are relatively harmless.

He said, "For the most part, these sharks are really skittish, so when you get in the water, they're going to scatter and go away."