The First Uterus Transplant In The US Was A Brief Success 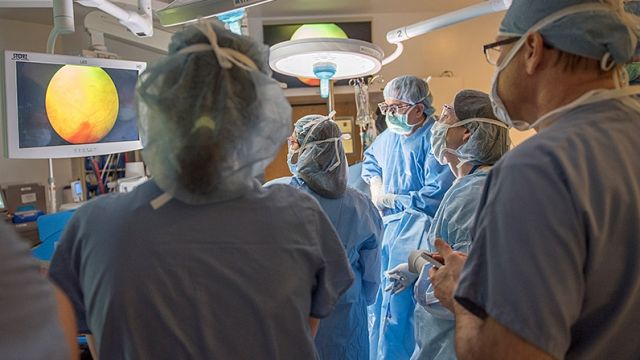 SMS
The First Uterus Transplant In The US Was A Brief Success
By Katie Link
By Katie Link
March 9, 2016
Doctors at the Cleveland Clinic haven't said what complication required that the organ be removed early.
SHOW TRANSCRIPT

The first uterus transplant ever performed in the U.S. failed Tuesday. Doctors were forced to remove the organ less than two weeks after the original surgery because the 26-year-old patient developed a "serious complication."

Just a day before the unspecified complication arose, the patient, only identified as Lindsey, told reporters the procedure gave her hope.

"And that began when I was 16 and was told I'd never have children. And from that moment on I prayed that God would allow me the opportunity to experience pregnancy, and here we are today at the beginning of that journey," Lindsey said.

Doctors haven't said why the transplant failed, but WOIO reports about 70 different medical professionals evaluated Lindsey before the procedure and that doctors were cautiously optimistic afterward.

Her transplant was part of an ongoing study. Cleveland Clinic reportedly plans to complete transplants on nine other women in hopes they will someday deliver babies of their own.

The uterus was never permanent. Doctors said that after one or two pregnancies they would remove the organ so the mother didn't have to stay on anti-rejection medicine.

But for Lindsey, the removal came much sooner than expected. According to Newsy's partners at WEWS, Lindsey released a statement that reads in part: "I just wanted to take a moment to express my gratitude towards all of my doctors. They acted very quickly to ensure my health and safety."