The First NFL Matchup Was More About Who Wasn't There 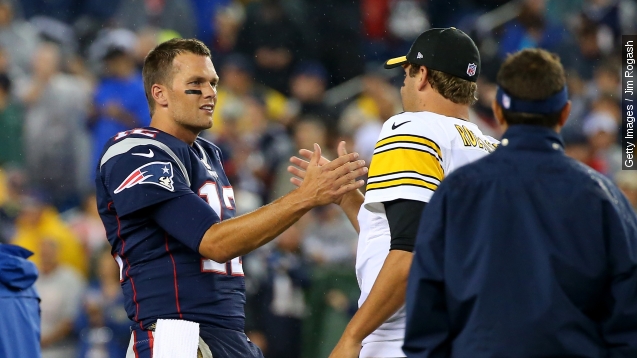 SMS
The First NFL Matchup Was More About Who Wasn't There
By Grant Suneson
By Grant Suneson
September 11, 2015
The two teams that played in the first matchup of the 2015 NFL season are still battling some huge losses to start the year.
SHOW TRANSCRIPT

The NFL kicked off its 2015 season Thursday, and no teams were happier about that than those in the opening night matchup, the New England Patriots and Pittsburgh Steelers.

By now, you're probably aware that Tom Brady is cleared to play, but both teams are still battling huge losses to start the season.

Brady received snaps from undrafted free agent David Andrews, because center Bryan Stork is out with a concussion. Steelers center Maurkice Pouncey was also sidelined with a broken fibula.

And each team's starting running back sat out after getting arrested in the same traffic stop. Former Steeler LeGarette Blount and Leveon Bell were traveling together when they were busted with marijuana in August.

The Patriots were without receiver Brandon LaFell due to a foot injury and lost their two best defensive players, Vince Wilfork and Darrelle Revis, in free agency.

And just when you thought it couldn't get any worse, the Steelers lost two kickers in the preseason and their last resort, Josh Scobee, missed his first two field goal attempts.

It wasn't just Pittsburgh and New England that had rough off seasons, though. It seemed like the injury bug hit just about everyone in the NFL

There were the normal injuries, like Arian Foster who tore his groin in the Texans' first padded practice.

And the Green Bay Packers lost top wide receiver Jordy Nelson for the whole year with torn ACL. Ditto for the Panthers and Kelvin Benjamin.

Then there were the bizarre ones. Jets starting QB Geno Smith will miss significant time after he suffered a broken jaw when he was sucker punched by a teammate.

And Giants defensive end Jason Pierre-Paul blew off his right index finger in a July 4th fireworks accident. Fans and coaches are certainly relieved the brutal off season is finally over.