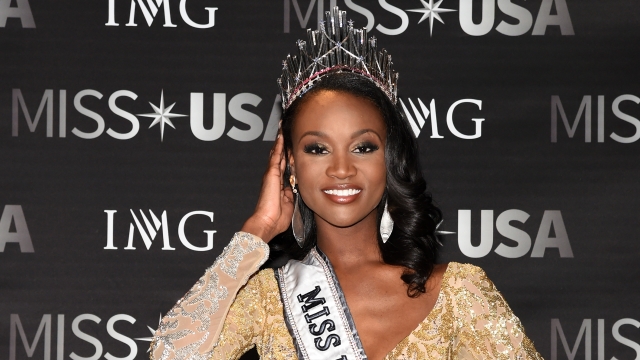 SMS
The First Military Miss USA Is Advocating For Women In Combat Roles
By Christian Bryant
By Christian Bryant
June 6, 2016
When asked about women in combat roles, Miss USA Deshauna Barber, a first lieutenant in the Army Reserves, said, "Women are as tough as men."
SHOW TRANSCRIPT

The Miss USA pageant crowned Deshauna Barber, Miss District of Columbia, its winner Sunday. Aside from being D.C.'s first winner in 14 years, she's the first military Miss USA, and she's getting attention for her comments on women in combat positions.

During the pageant's Q&A portion, Barber was asked whether the Pentagon's December decision to open combat roles to women was more about political correctness or "our military's ability to perform at a high level."

"Our force of the future must continue to benefit from the best people America has to offer. In the 21st century, that requires drawing strength from the broadest possible pool of talent. This includes women," Carter said.

And her comments represent a pretty high-profile endorsement during a contest watched by millions of people.

Barber herself is a first lieutenant in the Army Reserves.

As for women in combat positions, Carter warned in March that it'll take time to see change. In the meantime, he said the military is working to address challenges associated with women moving up the military ranks.

This video includes images from Getty Images and clips from U.S. Department of Defense and The Miss Universe Organization.