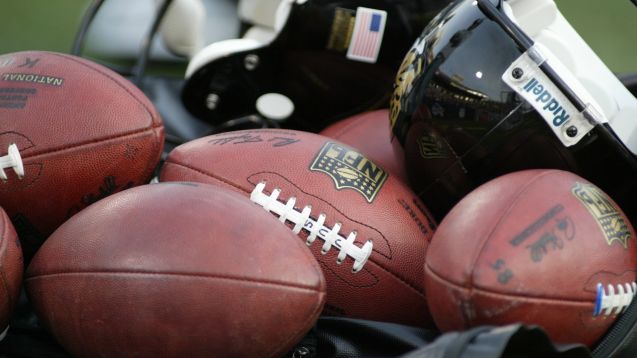 SMS
The First-Ever NFL Global Live Stream Is Kind Of A Big Deal
By Leah Becerra
By Leah Becerra
June 3, 2015
The NFL and Yahoo teamed up to put on the first-ever global live stream of an NFL game. And it will be free and legal.
SHOW TRANSCRIPT

Some big football news just dropped, and for once, it has nothing to do with Deflategate.

The National Football League and Yahoo are teaming up to put on the first-ever global live stream of an NFL game. And it'll all be free.

The Oct. 25 game between the Buffalo Bills and Jacksonville Jaguars in London will be streamed live on Yahoo.

We knew the NFL was considering this for a few months, but we weren't sure what game or when this would be happening.

The announcement comes not too long after the recent pay-per-view fight between Floyd Mayweather and Manny Pacquiao. A fight that cost viewers about $100 to watch and made approximately $425 million on pay-per-view buys alone — unless you found an illegal stream online.

Marketwatch called that boxing match "the first round in a fight between Internet video streaming and pay-per-view."

So legally live streaming an NFL game without a cable TV contract is huge.

The Verge calls this what it is: "a distribution experiment."

"TV networks have been live-streaming the Super Bowl to web viewers for several years now, but this marks the first time the NFL itself is taking the plunge and, for one day only, shutting cable partners out of the mix," The Verge said.

Not everyone is on board either. Critics are saying the game, "seems like a giant waste of 20 million bucks." And that this might be a bad game to stream because "nobody in the U.S. will watch."

But if this experiment goes well, we could eventually see more games streamed live legally — and in HD.

This video includes an image from Getty Images and music by Centz / CC BY NC ND 3.0.