The First Apple Watch Apps Have Some Limitations 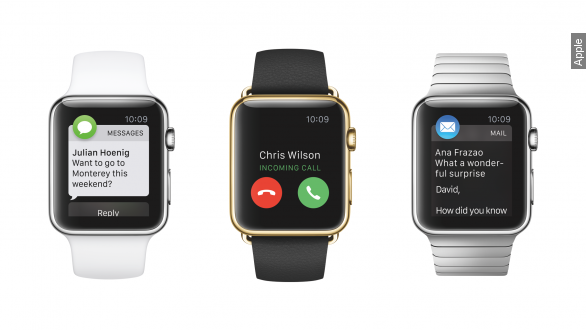 SMS
The First Apple Watch Apps Have Some Limitations
By Evan Thomas
By Evan Thomas
April 25, 2015
Reviewers find the first wave of apps for Apple’s new smartwatch run into both software and hardware constraints.
SHOW TRANSCRIPT

The Apple Watch started shipping to consumers on April 24, so naturally there’s already an app ecosystem springing up to fill it with software.

Apple showcases some of the first apps on its website. Names such as Twitter, Shazam and The New York Times are already bringing their services over to the new gadget.

But don’t expect a wrist-mounted iPhone. Early testers find there are both software and hardware limitations when it comes to watch apps.

“Starbucks shows you where to get a latte, but doesn’t let you buy one. You have to launch a whole other app, called Passbook, to do that. And Instagram only shows you the 10 most recent pictures in your feed. And they’re too small to like with confidence,” said The Wall Street Journal’s Geoffrey Fowler.

With the exception of those pre-installed by Apple, all these apps run on your phone and send their data to the companion watch. The Verge found it can make for a sluggish experience.

“Think of them more like remote controls for the apps on your phone. You don’t really need them. Apple says true native apps are coming later this year, and hopefully they’ll do more,” said Nilay Patel.

There are even games, but Ars Technica’s investigations show some built-in caveats.

That means you shouldn’t expect to sit down and game on the Apple Watch the same way you might on a bigger iPhone screen. Ars expects simpler games will be more successful. (Video via Everywear Games)

Apple says support for native apps that run directly off the watch’s hardware will arrive later this year.