The Financial Side Of The Marriage Equality Debate 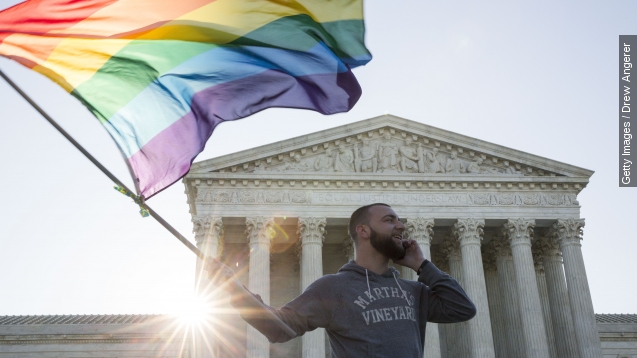 SMS
The Financial Side Of The Marriage Equality Debate
By Matt Picht
By Matt Picht
June 25, 2015
The Supreme Court's ruling on whether or not same-sex marriages should be recognized will have wide-ranging economic impacts for same-sex couples.
SHOW TRANSCRIPT

The Supreme Court's verdict on the contentious issue of same-sex marriage has wide-reaching implications for same-sex couples — not just emotionally, but financially as well.

Recognizing same-sex marriage unlocks a host of federal benefits for these couples. In 2004, the U.S. Government Accountability Office calculated there are more than 1,100 federal provisions affected by marital status. (Video via WFTV)

The cost of missing out on these benefits can vary greatly, but a 2009 analysis by The New York Times found an unmarried same-sex couple could lose anywhere from $41,000 to $468,000 over their lifetime compared to a similar, married straight couple.

The benefits include Social Security, which pays out more for married couples. Spouses are entitled to 50 percent of a partner's benefit if it's higher than their own and can receive that benefit if they survive their partner. (Video via U.S. Social Security Administration)

And it's much easier to extend employer-provided health insurance coverage for a spouse than a domestic partner — the latter option counts as taxable income.

Filing taxes jointly is where things get tricky. In general, married couples pay less in property and estate taxes than domestic partners and usually have less income tax liability.

But couples with similar income levels could face the so-called marriage penalty — pooling their incomes by filing jointly could bump them up to a higher tax bracket. (Video via The Wall Street Journal)

That's something same-sex couples had to grapple with last tax season, after the court struck down the Defense of Marriage Act.

One CNBC reporter said, "Most gay couples that I've talked to say they're so happy that they're finally being acknowledged by the federal government, that this union has been recognized; they're willing to pay a little bit more in taxes."

It's also worth noting that some federal programs, including Supplemental Security Income and Medicaid, calculate eligibility by looking at the shared income and assets of both partners in a marriage. Getting married could force some people out of these programs. (Video via Bev Sykes / CC BY 2.0)

From the government's perspective, the savings from those programs will more than offset increased benefit payouts if same-sex marriages are recognized. That's according to a 2004 Congressional Budget Office report.

And many major businesses have long been making the case that national same-sex marriage rights will cut down on red tape and help them retain diverse, talented workforces. (Video via Facebook)

This video includes images from Getty Images and Bev Sykes / CC BY 2.0.