The Fight To Save Darwin's Finches From A Blood-Sucking Threat 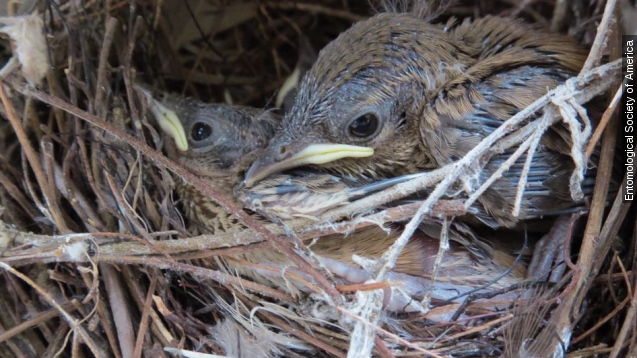 SMS
The Fight To Save Darwin's Finches From A Blood-Sucking Threat
By Steven Sparkman
By Steven Sparkman
December 17, 2015
The finches of the Galapagos Islands are all at risk of going extinct within the next few decades thanks to an invasive species of parasitic fly.
SHOW TRANSCRIPT

Darwin's finches are under attack by an invasive species and could be heading toward extinction.

A species of parasitic fly was brought to the Galapagos Islands from South America sometime in the latter 20th century, and it's now a threat to virtually every bird species on the islands. (Video via YouTube / Amazing Places on our Planet)

The flies lay their eggs in birds nests, and the larvae feed off the baby birds after they hatch, weakening the chicks and lowering their chances of survival. The flies also appeared suddenly, meaning the finches, which are literally textbook examples of evolution, haven't evolved a defense. (Video via Jody O'Connor)

That's bad news for some species like the mangrove finch, one of the rarest birds in the world. But a study by University of Utah biologist Dale Clayton says even the more common of Darwin's finches could be extinct within a few decades.

Luckily, the study also shows that even small steps toward controlling the fly population would be enough to save the famous birds.

Organizations like the Charles Darwin Foundation are already experimenting with ways to fight the flies, including countering them with a species of predatory wasp and setting fly traps around the island.

One of Clayton's former students came up with another ingenious technique: Let the birds fight the pests themselves. In a crowd-funded experiment, Sarah Knutie set out insecticide-treated cotton, which the birds used to build their nests, killing the flies. (Video via KSTU)

Scientists are already experimenting with the so-called "self-fumigation" technique to protect the mangrove finch.