The Fight Against Breast Cancer Is Different In Saudi Arabia 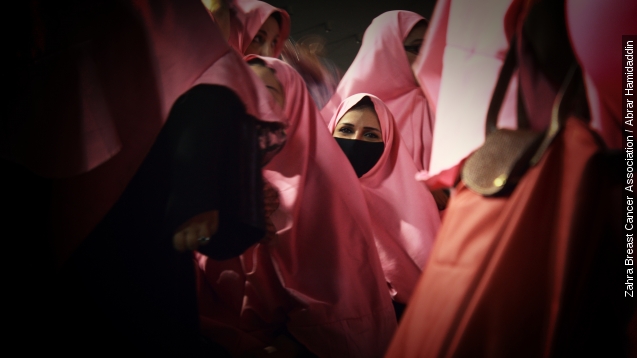 Women in Saudi Arabia face a lot of barriers. They aren't allowed to drive, they're expected to cover themselves in public, and they face many other policies and cultural norms governing their roles in public and the workplace.

But the impact these issues have on women's health in the country is less talked about.

Breast cancer is the most common form of cancer for women in Saudi Arabia, and is the leading cause of death. Women in that country get cancer at a younger age than women in the U.S., and they are diagnosed in the late stages of cancer much more often than women in developed nations, according to the Saudi Ministry of Health. Saudi Arabia also has one of the highest mortality rates for breast cancer in the world.

Part of the reason women are diagnosed so late is stigma.

"It's a very difficult conversation to have and difficult words to say in public," Princess Reema Bint Bandar al-Saud said.

At the South by Southwest festival this year, she announced a breast cancer initiative she's leading in her country and talked about why getting the word out about early detection is so necessary.

"It is a very closed and private community, and talking about specific body parts are taboo, and that goes not only for breast cancer, ovarian cancer, prostate cancer. ... The method that we need to educate the women on for early detection is an uncomfortable conversation to have," Reema said.

"In other words, to check yourself," said Bob Safian, editor of Fast Company.

"To check yourself," Reema said.

In 2010, the princess organized a world-record-breaking gathering of almost 4,000 Saudi women to form the breast cancer ribbon. It was all to try to break down stigmas and educate women across the country about the disease.

10KSA is hoping to break that record again this December — with 10,000 people — at a wellness event that will benefit the Zahra Breast Cancer Association and will include everything from health screenings to a zumba lesson.