The Fashion Industry Promotes Plus Size, Just Not For Men 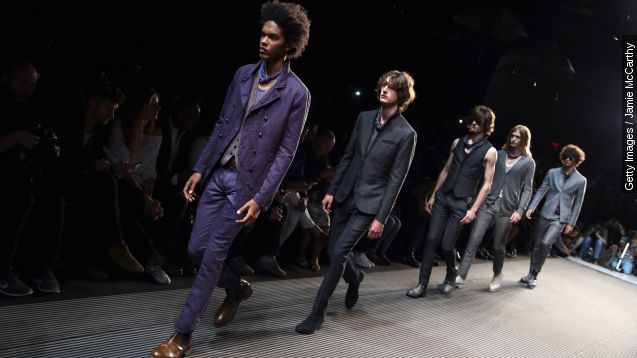 SMS
The Fashion Industry Promotes Plus Size, Just Not For Men
By Katie Link
By Katie Link
August 27, 2015
Many have said models in the fashion world are too thin. Lately, there've been more plus-size female models, but where are the guys?
SHOW TRANSCRIPT

Does he look like the guy you sit next to at work? What about him? Would you see this guy at the grocery store? Doubt it.

There's a recurring theme in those photos. Male models who are far from average.

In response to criticism surrounding too-thin models, there has been an increased demand for plus-size models. But there's a catch: Those models are mostly female.

Maybe you'll recognize Tess Holliday? The size-22 model landed herself the cover of People magazine this past June and is paving a new path for the plus-sized models. (Video via NBC / "The Meredith Vieira Show")

So where is Holliday's male counterpart? If he's out there, we haven't met him yet.

According to one model agent, there's a reason why there aren't more big boy models on display. He told Yahoo Style: "As an agency, we don't dictate demand, we respond to it. ... If there was a strong demand for plus-size male models, believe me, we would be scouting for them."

There might not be a demand for them, but we all remember how quickly the "dad bod" phenomenon took hold.

For all you "dad bod" champions out there, here's some good news: Fashion Times reports that the man behind the Instagram account @TheFatJewish, Joshua Ostrovsky, is hosting a Dad Fashion Show.

Yup, that's him sliding down a cheese marinara slip-n-slide.

His show will happen during New York Fashion Week next spring. In addition to the show, he also signed a modeling deal with One Management.

He's likely an exception though. Other runway shows will likely use the standard male model.

But, more average male models are popping up in Europe. According to The Guardian, three German modeling agencies represent plus-size male models. One owner says his plus size models are good-looking, have full hair and nice teeth.

So, if you're an average guy looking for some modeling work, make sure you can check all those boxes.