The EU's Refugee Bargain With Turkey Comes At A High Price 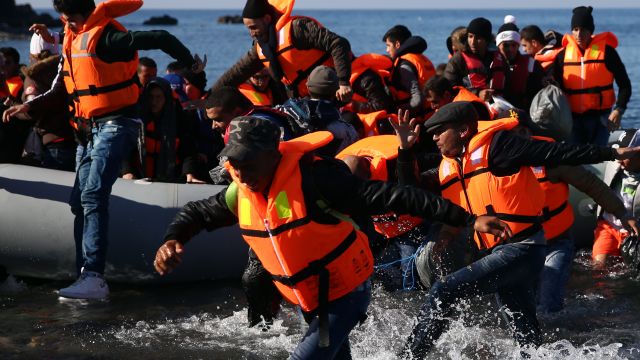 SMS
The EU's Refugee Bargain With Turkey Comes At A High Price
By Matt Picht
By Matt Picht
March 8, 2016
The plan could help curb illegal migration from Turkey to the EU, but critics say it puts refugees' rights at risk.
SHOW TRANSCRIPT

The European Union is once again leaning on its uneasy alliance with Turkey to help curb the ongoing refugee crisis. The two sides have reached a tentative agreement designed to cut down on illegal migration.

If it works, the new plan could add some much-needed regulation to the incoming flow of migrants and asylum seekers and make it easier to find solutions to the crisis. But human rights advocates are worried the rights of refugees might be sacrificed in the process.

The proposal would allow EU countries to deport anyone who makes the dangerous ocean crossing from Turkey into Greece. But for every person sent back, European countries would have to admit a refugee from Turkey's refugee camps in return.

EU leaders hope this plan will discourage people from attempting to reach Europe by dangerous and illicit means. But Turkey's cooperation comes at a high price; the country managed to double the amount of aid the EU is paying Turkey to $6.6 billion.

In addition to the cash, Turkey's also getting some concessions from the EU; its citizens will be able to travel within the bloc visa-free by June, and the country's application to join the EU is getting fast-tracked.

The United Nations' refugee agency has criticized the plan, saying the mass deportations of asylum seekers would violate international law. And human rights groups have pointed out refugees and asylum seekers aren't as safe in Turkey as they are in Europe.

And allowing Turkey into the EU would involve turning a blind eye to the government's increasingly authoritarian policies. EU membership was once thought of as an incentive for Turkey to enact democratic reforms; now, it's a bargaining chip in the ongoing crisis.

But Turkey's arguing it's already doing more than its share of work in the crisis; according to the U.N., the country already hosts around 2 million refugees. Further details of this proposal will be hammered out in an EU meeting later this month.

This video includes clips from the European Council, UNHCR and the IHH Humanitarian Relief Foundation.