The Earth Could Be Full Of Tiny, Unreachable Diamonds 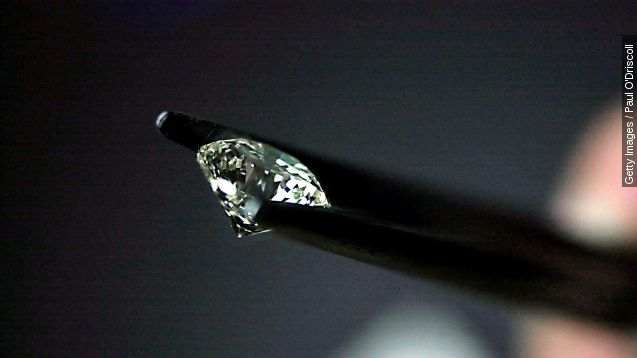 SMS
The Earth Could Be Full Of Tiny, Unreachable Diamonds
By Mari Jo Valero
By Mari Jo Valero
November 5, 2015
A new study suggests diamonds are common within the earth. How they're created might be less complex than we thought.
SHOW TRANSCRIPT

You'd think a diamond would be a rare, exotic stone, right? Well, as it turns out, it may be the most common gem of all.

A new study by Johns Hopkins University says diamonds may form during a much simpler process than previously thought, and that could mean there are tiny diamonds deep in the earth.

Diamonds usually form through the oxidation of methane or a reduction in carbon dioxide.

But the research, published in the journal Nature, suggests diamonds also form as water flows from different types of rock while undergoing extreme heat and pressure.

Researchers say the diamonds form at temperatures up to 2,000 degrees Fahrenheit and over 100 miles below the Earth. That's more than 10 times the depth humans have successfully drilled to.

Which isn't exactly accessible. Many of those diamonds also wouldn't work for engagement rings or other jewelry because they're so tiny, you'd need a microscope to see them.

Diamonds used in engagement rings could have once been deep in the Earth, too, but they were brought toward the surface through magmatic eruptions.

While you likely won’t see a drop in diamond prices any time soon, the research is still pretty significant. It could unlock the clues to the inner workings of Earth and the carbon cycle — which is responsible for life on our planet.